Take a DEEP BREATH; whether you are like me and believe that the BEST COURSE OF ACTION is to protect the elderly and the immune-weakened, while the rest of us continue BUILDING our lives, unleashing the full power of ingenuity towards alleviating the suffering and fear of the compromised, so they can ALL return to normalcy – or – whether you’re of the opinion that everyone should stay at home, the fact remains that the PANIC PHASE is behind us. Now it’s time to defeat it COMPLETELY!

Things aren’t going back to normal anytime soon, though. Most people, even if they feel safe themselves, have families to consider. Going about your day as normal has now become a biological crime, a politicized topic.

Many grandchildren, sons and daughters aren’t visiting their parents and grandparents and I do expect that to continue for a while.

Malls have opened in many places, but consumers choose to STAY AWAY, even though the owners are making EFFORTS to keep the compounds sterile and clean.

We can’t just SNAP THE FINGER and go back to normal is my point. 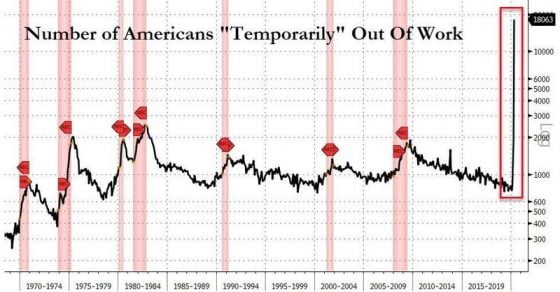 This is where the above chart COMES IN. About 18M Americans, who represent roughly 12% of the workforce, believe that they’re only TEMPORARILY out of a job. In other words, out of the 38M who are currently officially unemployed, more than half believe it’s a PASSING PHASE.

These are STAGGERING numbers of people, who are presently not being productive in the marketplace.

As you know, once a country goes above that 100% THRESHOLD, it is considered a banana republic of sorts. 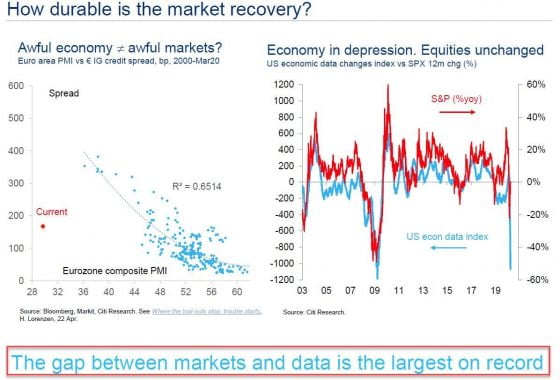 We need to understand why it is that Warren Buffett isn’t PULLING THE TRIGGER. We know it’s not because he shies away from buying after major dips. His biggest winners were American Express, bought right after the Oil Salad Scandal; GEICO, bought after bankruptcy; Coca Cola, bought after 1987; Wells Fargo, bought in the 1990 recession and The Washington Post, bought during the 1970s recession.

Clearly, Buffett isn’t scared of turbulence. If he isn’t buying, it’s because prices are TOO HIGH, not because he feels the world is ending.

I’m not saying that there is NOTHING ATTRACTIVE out there, only that the market itself is DECOUPLED from reality.

Personally, I’m following the guidelines I’ve set and purchasing according to the WATCH LIST.

This past Friday, the worst-ever unemployment report came out, yet markets rallied. These moves mean that investors are, as a whole, CLUELESS about the lurking danger.

As countries re-open, some cities, states, and countries will panic and DECIDE TO resume Stay-At-Home measures. 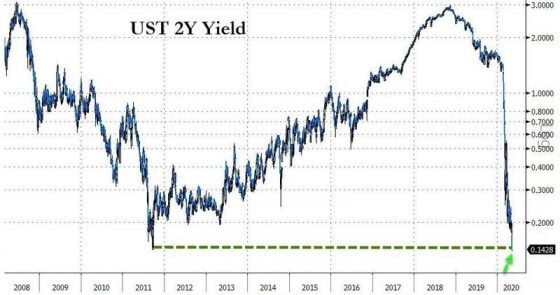 Huge sums of money are being loaned to the Treasury at the lowest-ever interest rates. This tells me that big players are attempting to RIDE OUT THE STORM, remaining liquid, so they can dance on the graves of the weak, who will get shaken out. CLEARLY, the most sophisticated money managers anticipate FALLOUT of epic proportions.

I’ve heard from highly REPUTABLE SOURCES that some believe they will not need to purchase businesses from others, but will be given them FOR FREE, as owners will only seek to be employed in the enterprise they once owned and rid themselves of the liabilities.

These predictions don’t make me happy.

In the next 12-18 months, your ability to WITHSTAND adversity, to see years of hard work go down THE TUBE, will be tested.

I can’t stress enough how valuable it is to own GOLD in times like these.