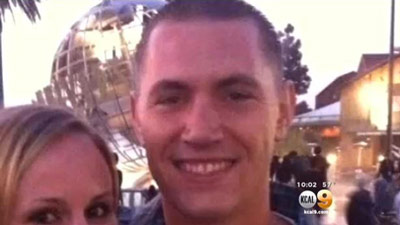 Eight San Bernardino County sheriff’s deputies are under investigation after a police helicopter captured a savage beating of a suspected horse thief. The latest incident shows, yet again, the culture of violence and total disregard for the rule of law that exists within America’s police departments from coast to coast.

As you’ll see in the following footage, captured live and apparently without the knowledge of officers on the scene, it’s not just about the color of one’s skin. Francis Jared Pusok, the man shown being tased, pistol-whipped to the head, punched, and kicked, is white. And while his record of resisting arrest, animal cruelty and robbery are certainly an indicator of his propensity for criminal activities, does it justify the life-threatening beat down dished out to him by officers of the law?

When the horse is spooked by a police helicopter, Pusok falls off before he is approached by an officer who tases him. Pusok is face down in the dirt and obviously not resisting, but another cop arrives on the scene and immediately begins violently kicking and punching Pusok in the head. The other officer also appears to pistol whip Pusok with the taser.

Seven other officers then arrive, some of whom also begin kicking and beating Pusok while he lay prostrate.

“In the two minutes after the man was stunned with a Taser, it appeared deputies kicked him 17 times, punched him 37 times and struck him with batons four times. Thirteen blows appeared to be to the head,” reports NBC Los Angeles.

Just seconds after Pusok is tased the video clearly shows he surrenders by first putting his hands up and out on the ground, and then moving them behind his back in a position that they can easily be handcuffed. But rather than following procedure, officers immediately begin punching and kicking him in the head and the rest of his body.

And like a pack of wolves, other officers arrive and jump in.

While Pusok has a fairly long list of criminal violations over the years, and he had allegedly stolen a horse and attempted to flee police, once he was taken down with the initial tase and showed his intent to surrender by putting his hands behind his back the incident should have been over.

Such police brutality has likely been taking place for a long time, but with the advent of the internet and real-time video streaming the American people are now seeing the God-complex of many of those in uniform tasked with protecting us.

Pusok is obviously not an isolated incident. Earlier this week an officer executed a man with several shots in the back after he was reportedly pulled over for a broken taillight and then fled on foot. Last year Eric Garner was killed by NYPD after being detained for selling cigarettes to make extra money – he was put into an illegal chokehold for 15 seconds.

A couple of weeks ago a friend of the author was pulled over, detained and threatened with arrest for simply failing to register her vehicle.

The culture of violence against the American people must stop. It begins with every officer authorized to carry a deadly weapon in America being outfitted with a body camera when performing their public duties. Those who are found to be violating their sworn duties and acting outside of the law should be charged, tried and punished accordingly.

If average Americans must follow the law and be held accountable, so too must those who purport to enforce it.