Santurom Is A Wolf in Sheeple Clothing: ‘People Have This Idea That They Should Be Left Alone’ 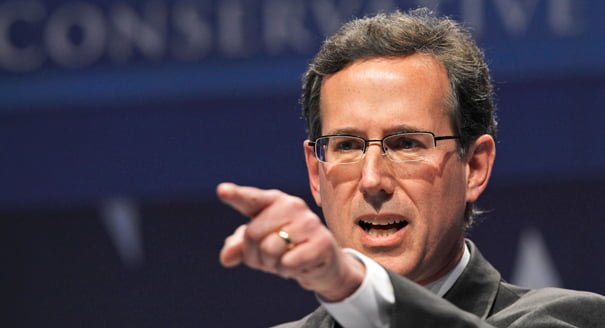 Presidential hopeful Rick Santorum, who came out of Iowa with a surprisingly strong finish last week, may not be everything he’s cracked up to be.

For those who have been following the Republican primary, Santorum’s questionable ethics were called out by Congressman Ron Paul, but likely dismissed by most of Santorum’s supporters as the musings of an extremist simply because they failed to do their research. If you ask most people, they’ll overwhelmingly agree that a large percentage of Congressional members are corrupt. Yet when it comes down to casting their ballots, they often ignore the fact that the very politician for whom they are voting is one of those morally-challenged scoundrels. We hate to burst your bubble, but Rick Santorum is one such politician.

From The  20 Most Corrupt Members of Congress Report (which includes snakes from the left and right):

Today, Citizens for Responsibility and Ethics in Washington (CREW) released its second annual report on the most corrupt members of Congress entitled Beyond DeLay: The 20 Most Corrupt Members of Congress (and five to watch). This encyclopedic report on corruption in the 109th Congress documents the egregious, unethical and possibly illegal activities of the most tainted members of Congress. CREW has compiled the members’ transgressions and analyzed them in light of federal laws and congressional rules.

CREW’s Most Corrupt Members of Congress:
Members of the Senate:

It is stunning that one of the top three most corrupt Congressional representatives in America today is actually getting any play at the polls, especially in a climate where the lawlessness, corruption, theft, and destruction of individual liberties has played such a pivotal role in social consciousness over the last several years.

You’d think Americans would be smarter and more willing to step outside the status quo just a little bit.

We have conservative republicans around the country talking about Rick Santorum as if he’d actually be any different than President Obama. Sure, you may agree with him on some ideas, but his core ideologies and political relationships are part and parcel with those of our President and the rest of the sycophants in government.

On his campaign web site Santorum claims that his greatest responsibility is “to protect the freedoms we enjoy.” But, as Judge Napolitano points out in the following report, Rick Santorum is no friend of limited government or personal freedom and individual responsibility. Like our President, when in public Mr. Santorum’s comments are carefully scripted to assuage the emotional needs of the sheeple. Every so often, however, even the most careful politician lets his true inner self slip out. Mr. Santorum did so in a recent radio interview:

One of the criticisms I make is to what I refer to as more of a Libertarianish right.

There is no such society that I am aware of, where we’ve had radical individualism and that it succeeds as a culture.

We can think of one such culture that did just fine with radical individualism for quite a while, until politicians life Mr. Santorum decided they needed to get involved in the labor force, taxation, monetary policy, commerce, our right to be secure in our homes and persons, and our ability to defend ourselves against threats from those who feel the rule of Constitutional law does not apply to them.

Rick Santorum. More of the same.