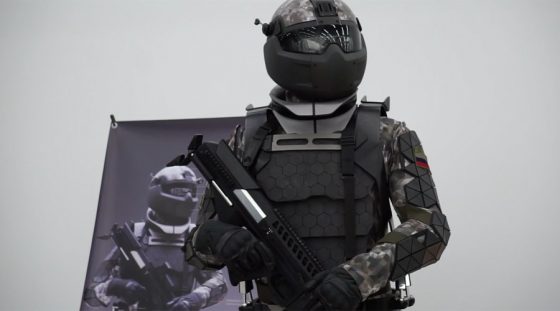 Russia’s new combat suit is getting a major upgrade. With threats of nuclear warfare pending in important regions of the globe, the nuclear resistant watch was a necessary addition to the futuristic fight suit designed by the former Soviet Union.

According to Newsweek, citing Rostec, the Russian defense contractor building the suit, the third-generation Ratnik-3 suit “comprises five integrated systems.” Those five subsystems include “life support, command and communication, engaging, protection, and energy saving subsystems,” according to Tass, a Russian state-owned media outlet. This could be the most advanced combat suit on the planet.

In total, the suit comes with 59 items, Tass said, including a powered exoskeleton that supposedly gives the soldier more strength and stamina, along with cutting-edge body armor and a helmet and visor that shields the soldier’s entire face. The suit also has a “pop-up display that can be used for tasks like examining a plan of the battlefield,” Andy Lynch, who works for a military company called Odin Systems, previously told The Daily Mail Online.

Russia did release a video of the combat suit in late June, but it only showed a static display of the suit making it incredibly difficult to discern if it actually has any of the capabilities that are claimed.

But the newest addition to this high-tech combat suit is fitting with the state of things on our politically volatile planet. The suit is being fitted with a watch that “retains its properties upon the impact of radiation and electromagnetic impulses, for example, upon a nuclear blast,” according to Rostec’s chief designer of the suit, Oleg Faustov.

The US hopes to unveil its own Tactical Light Operator Suit which would be similar to Russia’s Ratnik. The US’s suit is also known as the “Iron Man” suit and plans to show it off are scheduled for 2018. France is working on one too, the Integrated Infantryman Equipment and Communications system, or FELIN.

It’s the “space race” of combat suits. But in this contest, it appears that Russia is winning handily.