Russian Man Accidentally Kills Himself After Taking Pin Out Of Grenade

A Russian man accidentally killed himself after removing a pin from a grenade and snapping a photo of himself with said pin. Needless to say, the grenade went off, ending the man’s life.

Alexander ‘Sasha’ Chechik, a 26-year-old from Krasnodar, died in a grenade blast he caused.  The death is ruled an accident and not suicide.  Chechik also took images of himself with the pin removed from the grenade which he managed to send to several friends before the detonation. Police say that the images he sent to his friends indicated that he didn’t intend to kill himself.

The incident took place in the city of Labinsk in south-west Russia and the grenade detonated in Chechik’s hand. Russian news service Kuban.kp.ru reported that Chechik had been sitting in his car at the time of his death. 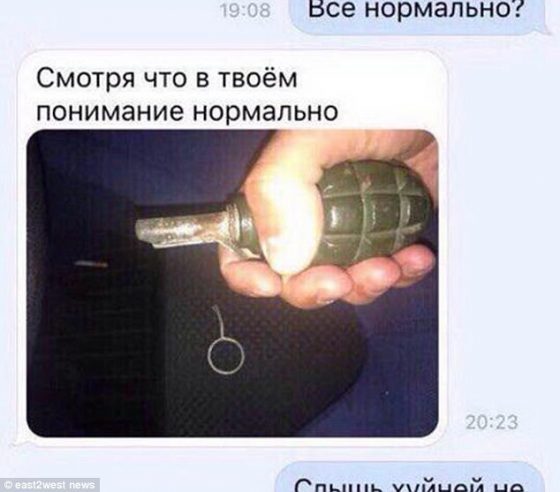 When looking at the photos the young man took, one can clearly see the pin is no longer in the grenade. Moments before his death, one friend had messaged him saying, “Where are you? Are you OK?”  Chechik responded saying, “Depends on what OK is in your understanding?” and sent the picture of the grenade with the pin laying on the seat. “Listen, don’t do stupid things. Where are you?” responded the friend.

But it was too late.  The grenade had gone off and the friend’s warning likely unread.

Police said they believe Chechik expected the grenade would not explode as long as he didn’t throw it. As he had also sent pictures to other friends, police have categorized his death as an accident, not suicide, according to reports. Unfortunately, Chechik was wrong, and he paid for his mistake with his life.  Police say that the blast killed Chechik instantly.