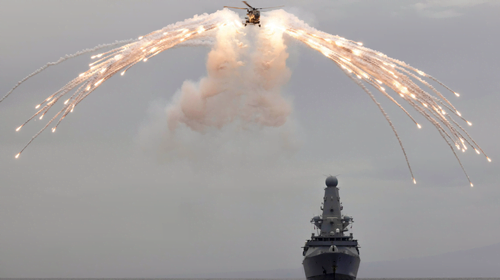 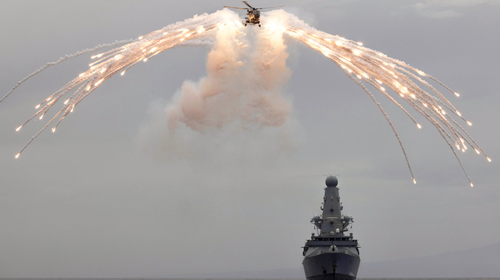 UK military drills involving HMS Defender in the Mediterranean, via The Drive.

In the days after the June 23 incident between the UK Royal Navy’s HMS Defender and a Russian patrol vessel and military aircraft near Crimea which resulted in warning shots fired from the Russian side, Putin asserted that a US reconnaissance plane had been nearby monitoring the dangerous close-call incident as it unfolded below.

Putin had cast the whole showdown as a “provocation” in which the US aircraft was present monitor Russia’s response to the UK vessel. Moscow’s position is that the UK vessel had ventured a full three kilometers into Russian territorial waters, which was met with a Su-24M dropping bombs in the Defender’s path along with the Russian patrol ship firing warning shots.

The latest charge on Sunday, however, has gone further, with Russian presidential spokesman Dmitry Peskov accusing Washington and the UK of essentially engineering the dangerously close military encounter in order to probe and test Russia’s defense of its borders.

“I think our intelligence certainly knows who made a decision there [in the situation with the British destroyer]. But certainly, I think such operations are basically planned by senior partners from overseas,” Peskov was cited in TASS as saying.

Given Putin’s prior words pointing the finger directly at Washington during his annual televised Q&A last month, this latest Kremlin statement is also no doubt a clear reference to the US (in terms of the provocative reference to “who made the decision here”). Presidential spokesman Peskov elaborated further in his Sunday statements that “in this case the destroyer was just a tool of provocation.”

These latest statements came with a warning, following the earlier summoning of the British ambassador and military attaché in Moscow quickly after the event. Peskov said Russia will continue to “respond harshly” to any future provocations in a similar way. This after UK officials expressed “surprise” at how rapidly the sea encounter devolved in a ‘live fire’ incident.

The Kremlin is now telling the West this is precisely what aggressors can expect and more:

“This is indeed so,” Peskov said, agreeing with a stance that in such situations Moscow will act harshly. He commented on a remark that Russian President Vladimir Putin’s reaction “was very harsh and it is clear that no provocations should be repeated, the response will be in accordance with the charter that says – to sink.”

“Obviously, the reaction will be certainly harsh” the presidential spokesman stressed further.

Footage of Russian Black Sea Fleet and Border Service of the Federal Security Service's prevention of the breach of the Russian Federation state border committed by the UK Navy destroyer «Defender» pic.twitter.com/4VnAlMjK4Y

The Sunday statements also shed more light on Putin’s decision to make public classified intelligence information in choosing to divulge that a US reconnaissance plane had been present throughout the ordeal. While the US side never confirmed it, and is not expected to given the presence of highly classified intelligence monitoring missions, Peskov elaborated that Putin made public information that proved it…

The Kremlin spokesman also noted that during this Q&A session Putin revealed the number of the reconnaissance jet’s tail number. “Someone even joked [during the event] that the president will now give the first and last names of this plane’s pilots and even their address,” he said.

This actually wasn’t the first time the Kremlin threatened to sink any foreign military ship that breaches Russian waters.

My feeling is that this was staged. Why? Help me understand …

Over a week ago the Associated Press reported of Moscow’s clear stance: “Russia is prepared to target intruding warships if they fail to heed warnings, a senior Russian diplomat declared Thursday after a Black Sea incident in which a British destroyer sailed near Crimea in an area that Russia claims as its territorial waters.”