Running of the Sheep 2016: Black Friday “Getting Scary Now” With 2 Shot Dead 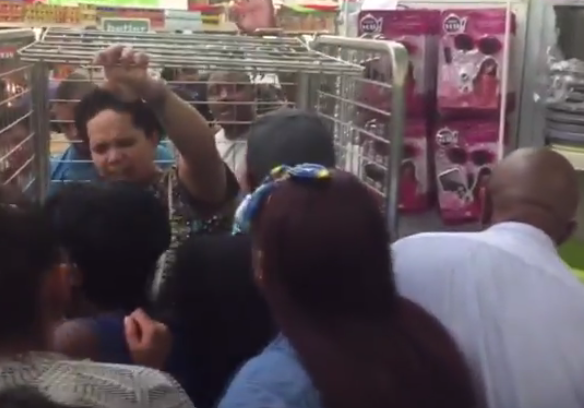 Black Friday madness has reached one of its most dangerous points in American history.

As the Sheeple lined up and mobbed retail stores after Thanksgiving dinner and early Friday morning for deals to kick off the holiday season, there have been at least three shooting incidents at stores across the United States – and at least two people were shot dead in the resulting frenzy and mayhem.

Many people lost all sense of perspective as they got caught up in it at Walmart, Macy’s and other stores during this grim holiday tradition in American stupidity.

Two people were shot dead and two others were injured in three separate incidents in New Jersey, Nevada and Tennessee as Black Friday shopping kicked off.

A man was fatally shot and his brother was wounded in a shooting outside of a Macy’s in New Jersey on Friday morning while another was shot dead in an apparent road rage incident in a Walmart parking lot in Nevada on Thursday.

A fourth person suffered a gunshot wound on Thursday at a mall in Tennessee as shoppers were taking part in early Black Friday sales.

A 20-year-old Atlantic City man was shot multiple times and pronounced dead at the scene while his 26-year-old brother, from Clayton, was shot in the leg and listed in stable condition at AtlantiCare Regional Medical Center.

One shopper who was at the scene and has been coming out for Black Friday shopping for the last ten years said the shooting was sad, adding that Black Friday is ‘getting scary now’.

Obviously, this is getting serious. People are willing to kill and die over their place in line, and over petty conflicts with other people in parking lots, stores and shopping centers.

It is sad and downright dangerous – not just for the people who unfortunately lost their life or were injured, but for society in general. This is the madness we have unleashed.

Meanwhile, these crazed shoppers caught on video are fighting and furiously mobbing over cheap towels and toilet papers!

The same America that is so deeply divided over politics, presidential elections and race is also prepared to lose it over consumer goods and holiday sales.

If that’s how people react over sales and ‘insane deals’ on household items…. how do you think they will react when the economic collapse hits home and people become truly desperate?

The Running Of The Sheep: Black Friday 2015 Video Hall of Shame

Sheeple: Why You Should Feel Sorry For Them