Dr. Deborah Birx, the White House COVID-19 response coordinator under former President Donald Trump, said she knew that the COVID vaccines were never “going to protect against infection.” As people start to witness in real time that these shots were never even about COVID, but about something else entirely and watch the side effects (such as Sudden Adult Death Syndrome) hit hard, the ruling class has to try to scramble to retain whatever authority they have over the masses.

A major cover-up of what these shots really are has been ongoing. Fact-checkers, rulers, and masters continue to try to tell the slaves to get injected, and many comply willingly without question. But the narrative is slowly crumbling as people can see they’ve been lied to.

A year ago, President Biden told the world during a now infamous CNN townhall that “you’re not going to get COVID if you have these vaccinations.”

Biden, exactly 1 year ago today: "You won't get Covid if you're vaccinated"

As The Epoch Times’ Zachary Stieber reports, one of the former U.S. officials who led the COVID-19 response during the Trump administration said on July 22 that COVID-19 vaccines were not expected to protect against infection.

“I knew these vaccines were not going to protect against infection. And I think we overplayed the vaccines. And it made people then worry that it’s not going to protect against severe disease and hospitalization,” Birx, the White House COVID-19 response coordinator under former President Donald Trump, said during an appearance on Fox News. -Epoch Times

Dr. Deborah Birx: "I knew these vaccines were not going to protect against infection and I think we overplayed the vaccines …"

Claims vaccines "protect against severe disease and hospitalization" before saying that 50% of those who died via Omicron were older & vaccinated. pic.twitter.com/CTifr3QZzX

Under Donald Trump’s Operation Warp Speed program designed to bring these experimental gene therapy shots to the public, they were released and approved in record time.  Moderna and Pfizer COVID-19 vaccines were granted emergency use authorization in late 2020 to prevent COVID-19 and were promoted by many health officials, including Birx.

“This is one of the most highly-effective vaccines we have in our infectious disease arsenal. And so that’s why I’m very enthusiastic about the vaccine,” Birx said on an ABC podcast at the time.

She made no mention of concerns the vaccines might not protect against infection. But Centers for Disease Control and Prevention’s Dr. Rochelle Walensky said the shots don’t stop transmission. So she admits to either a “vaccine” that sheds or an ineffective shot.

So what exactly is the point of all of these injections? Four of them aren’t helping stop anything except a long life, it seems. But it also appears that the corporate government masters are pushing a new drug now called Paxlovid.

Paxlovid is a COVID-19 pill produced by Pfizer that has had uneven results in clinical trials and studies but is recommended by U.S. health authorities for both unvaccinated and vaccinated COVID-19 patients to prevent the progression to severe disease.

“But let’s be very clear—50 percent of the people who died from the Omicron surge were older, vaccinated,” she said.

“So, that’s why I’m saying, even if you’re vaccinated and boosted if you’re unvaccinated, right now, the key is testing and Paxlovid,” she added.

Recently, the ruling class claimed that Joe Biden was taking Paxlovid after being injected four times and still getting COVID. It’s probably time to question Paxlovid and why they are beginning to push this one the public.

The data is not on the ruling class’s side. We have to start questioning why they are pushing so many drugs on us for all kinds of diseases when the main drug was a farce to begin with. 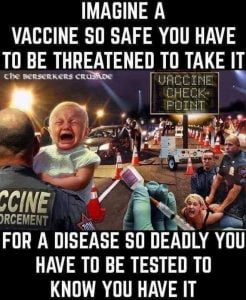 We need to continue to question everything, especially those who want nothing more than to keep us from realizing the slave system we are in. The rulers are not afraid of each other. They fear us figuring out the truth which is that we are not free and that we are their slaves. But we don’t have to be.