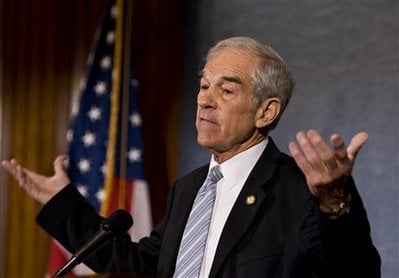 Ron Paul has written another column advocating the auditing of, and eventually shutting down, the Federal Reserve system.

Until the United States has the political will to tackle this important issue, America is in grave danger of “a series of ever-worsening economic crises” which will wear down the purchasing power of the dollar while further eroding the standard of living for everyone.

In stark terms, Dr. Paul warns that this country and the world will “soon experience a major economic crisis” unless they change course on monetary and economic policy.

via the Ron Paul Institute:

The failure of the Fed’s policies of massive money creation, corporate bailouts, and quantitative easing to produce economic growth is a sign that the fiat money system’s day of reckoning is near. The only way to prevent the monetary system’s inevitable crash from causing a major economic crisis is the restoration of a free-market monetary policy.

One positive step Congress may take this year is passing the Audit the Fed bill. Fortunately, Senator Rand Paul is using Senate rules to force the Senate to hold a roll-call vote on Audit the Fed. The vote is expected to take place in the next two-to-three weeks. If Audit the Fed passes, the American people can finally learn the full truth about the Fed’s operations. If it fails, the American people will at least know which senators side with them and which ones side with the Federal Reserve.

Allowing a secretive central bank to control monetary policy has resulting in an ever-expanding government, growing income inequality, a series of ever-worsening economic crises, and a steady erosion of the dollar’s purchasing power. Unless this system is changed, America, and the world, will soon experience a major economic crisis. It is time to finally audit, then end, the Fed.

The decline in the stock market following Friday’s jobs report was attributed to many investors’ fears over the impact of the predicted interest rate increase. Wall Street’s jitters about the effects of a rate increase is another reason to doubt that the Fed will soon increase rates. After all, according to former Federal Reserve official Andrew Huszar, protecting Wall Street was the main goal of “quantitative easing,” so why would the Fed now risk a Christmastime downturn in the stock markets?

With the 2016 election in mind, Paul mentioned the efforts of his own son, who is a candidate, while also acknowledging the recent statement of controversial GOP frontrunner Donald Trump – who sounded off on the Federal Reserve and accused its chairwoman Janet Yellen of holding off on rate out of political consideration for President Obama – who doesn’t want a bubble to burst, and subsequent round of “recession-slash-depression” during his term in office.

Donald Trump made headlines last week by accusing Janet Yellen of keeping interest rates low because she does not want to risk another economic downturn in President Obama’s last year in office. I have many disagreements with Mr. Trump, but I do agree with him that the Federal Reserve’s polices may be influenced by partisan politics.

Janet Yellen would hardly be the first Fed chair to allow politics to influence decision-making. Almost all Fed chairs have felt pressure to “adjust” monetary policy to suit the incumbent administration, and almost all have bowed to the pressure. Economists refer to the Fed’s propensity to tailor monetary policy to suit the needs of incumbent presidents as the “political” business cycle.

Presidents of both parties, and all ideologies, have interfered with the Federal Reserve’s conduct of monetary policy. President Dwight D. Eisenhower actually threatened to force the Fed chair to resign if he did not give in to Ike’s demands for easy money, while then-Federal Reserve Chair Arthur Burns was taped joking about Fed independence with President Richard Nixon.

Without a doubt, a clearer picture of the Federal Reserve decisions and secret deals would prove the tyranny of monetary control.

The market is vulnerable to any rate increase, as Yellen well knows, while the future prospects for American jobs is being whittled away.

Obama’s Wars Are a Desperate Attempt to Save the Dollar: “Global Hegemony Under Attack”