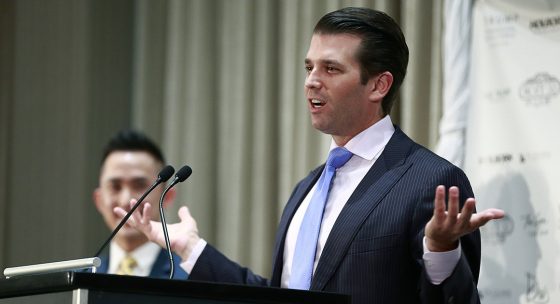 In a surprising speech to a group of young conservative activists in Florida, Donald Trump Jr. warned about the now admitted conspiracy carried out by the highest levels of the government to stop his fathers agenda by any means necessary.

Speaking to a gathering held by the Turning Point USA Student Action Summit, Trump Jr. noted that his father is currently dealing with a rigged system as well as a conspiracy by the deep state to take him out.

“There is, and there are, people at the highest levels of government that don’t want to let America be America,” Trump Jr. noted, echoing many voices in the alternative media who have discussed this very fact since the moment Trump was elected.

“My father talked about a rigged system throughout the campaign, and people were like, ‘Oh, what are you talking about?” he continued. “But it is. And you’re seeing it.”

CNN was the first to report on the comments and although their article wasn’t the usual full-scale anti-Trump propagandist piece, it did laughably claim that his comments were “freewheeling” as if to imply that they came out of no where and have no basis in reality.

Trump Jr.’s freewheeling comments before the Turning Point USA Student Action Summit came after he spoke earlier this month before congressional investigators and as some on the right, including him, increasingly attack the Department of Justice’s special counsel probe, alleging it is politically compromised.

In his remarks Tuesday, Trump Jr. railed against special counsel Robert Mueller’s investigation and attacked the media’s coverage of the Russia story, saying the ongoing probe was emblematic of the kind of “rigged system” the President had railed against during the campaign.

More ridiculous, one of the panelists that CNN interviewed after playing a clip of Trump Jr’s comments (who of course was a former Obama official) actually claimed that discussing documented facts about parts of the FBI’s political bias somehow helps Russia.

That’s right, according to the likes of CNN, even talking about Hillary operatives within the FBI, such as Peter Strzok, means that you are working with the Russians!

With that being said, the mainstream medias hold over the minds of the American people continues to slip each day and comments such as those by Trump Jr. only further reveal that startling lengths that the deep state puppets in the media will go to take out a democratically elected president.

Keep in mind that we already know that anti-Trump operatives were working at the HIGHEST LEVELS of the Federal Bureau of Investigation to hurt Donald Trump. This is a documented fact and Trump Jr. is only speaking about what the media itself has reported yet he is one again accused of helping the Russians.

If you don’t realize at this point that the likes of CNN are working against the American people, one has to wonder what it will take?