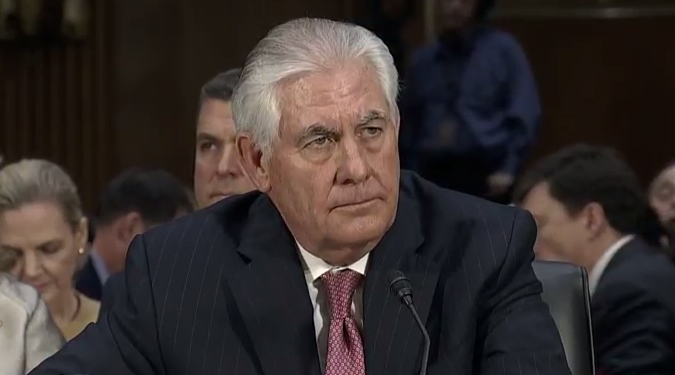 A very powerful man is now facing the whole country in a very public way for what may be the first time. He appears a bit nervous and perhaps rehearsed.

Rex Tillerson, Donald Trump’s pick for Secretary of State, is facing confirmation hearing today as the next administration prepares to begin. Here’s some biographical info.

Nevertheless, it seems that former Exxon Mobil CEO will likely be confirmed as Secretary of State with ease. Many of the questions have been quite friendly, and perhaps even soft ball.

Key issues include foreign policy, his past ties with Russia, Middle East issues, a commitment to defense and use of war ‘to back up diplomacy.’

Also discussed were potential conflicts of interest with ExxonMobil, the company he spent his entire career with, as well as climate change policies. Oil (and natural gas) as a weapon of foreign policy has been little appreciated until now, but has played a huge role in Venezuela’s volatile economic crisis, and has stoked tensions with Russia.

His previous support for a carbon tax seems unusual from a big oil exec; however, when taken into account with the Rockefeller support for the green agenda, one has to wonder if it will have any bearing on the domestic policies over the next four years.

The importance of natural gas in manipulating the gas price is a key development in recent years, as a vulnerable U.S. empire seeks to hold onto power as the dominance of the petrodollar fades and other world powers challenge the scale of order.

Rex Tillerson will bring an interesting factor into the Trump Administration, and a naked representation of corporate power over policy…

In one of the futile demonstrations that marked the run-up to the Iraq war, I saw a woman with a sign that read “How Did Our Oil End Up Under Their Sand?” In nine words she managed to sum up a great deal of American foreign policy, back at least as far as the 1953 coup that overthrew Mossadegh in Iran and helped toss the Middle East into its still-boiling cauldron.

If the Senate approves Rex Tillerson after his testimony on Wednesday, they’ll be continuing in that inglorious tradition – in fact, they’ll be taking it to a new height, and cutting out the diplomats who have traditionally played the middleman role.

Rex Tillerson – who has literally spent his entire working life at Exxon – is big oil personified. It’s like appointing Ronald McDonald to run the agriculture department…

2017, As Goldman Sachs Sees It: “What Keeps Wall Street Up At Night”