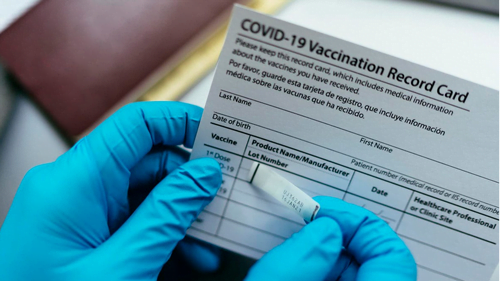 A week ago we detailed the story of the American couple getting fined $50,000 by the government of Canada after they were caught providing border agents with fake COVID-19 “proof of vaccination” documents at the airport.

We noted this seeming unusual occurrence was likely the tip of the iceberg in terms of the rise of an entire sophisticated counterfeit documents industry geared toward getting around new restrictions quickly going into places, such as the recent New York City ban on the unvaccinated dining in restaurants or entering gyms and other public venues. This also as so-called digital ‘COVID passports’ aren’t yet uniform within the US or especially around the globe, and as global protests and pushback are on the rise, especially in Europe.

And most recently the United States has mandated that all federal workers must be vaccinated, with the only alternative being a regimen of regular testing and mask-wearing. Major employers are also increasingly issuing mandates for their in-person staff. There will, without doubt, be many who refuse what is still at this point an experimental vaccine (given lack of formal FDA approval and the regular rigorous process), while also naturally desiring to avoid the extreme inconvenience of daily social distancing and generally being placed in a second class “non-vaxxed” social category.

“In May, officers arrested a bar owner in California for allegedly selling fake vaccination cards costing $20 each,” it continues. “The alleged perpetrator was charged with identity theft, forging government documents and falsifying medical records.”

And a DOJ spokesman confirmed in the report that “While we do not have definitive numbers, we are seeing more of these types of schemes recently.” This includes the example of a California licensed practitioner of homeopathic medicine, described as running a scheme where clients would order “immunization pellets” and receive CDC vaccination cards in return, including detailed instructions on how to write in specific vaccine lot number information into the card.

Currently, there’s talk in the US of implementing a uniform digital vaccination “proof” for each person fully vaccinated; however, as the WSJ details further in Europe where such an EU pass does exist, fakes are still popping up all over:

Despite the more-secure format, fake versions of the EU digital certificate have multiplied. In Italy, there are about 30 social-media profiles purporting to sell fake certificates, about 500 of which have been sold in the past few months, according to Ivano Gabrielli, an Italian police commander who oversees online fraud investigations. Telegram is the main platform being used for the sale of the fake certificates, he said.

Ultimately the current fakes that are out there, especially the digital fakes, are believed to be easily detectable. But this would all change in a scenario where information in a nation’s vaccine registry might be hacked, for example.

But like with any certificate or sought-after identity-related document in the past, forgers will without doubt get better at the craft.

The WSJ report provided another interesting example of fraudulent vaccine passes in the EU as follows:

An Italian channel on Telegram is currently advertising a digital version of a vaccine certificate for €100, the equivalent of $118, and a printed copy for €120. “Family packs” consisting of four passes can be had for €300 for digital versions and €350 for printed copies. Passes can be paid for in cryptocurrencies such as bitcoin and in some cases through PayPal or with Amazon gift cards.

Authorities in the US and EU are working the counteract and shut down the increasingly sophisticated schemes.

Without a doubt, the fakes will continue to be proliferated and will show up increasingly in the United States as more locales and possibly even entire states enact a ‘two-tiered system’ of sorts segregating the status of the vaxxed vs. unvaxxed. Each new day of this and it seems we’re all living in a Black Mirror episode.