Resistance to Globalism: It Begins with You 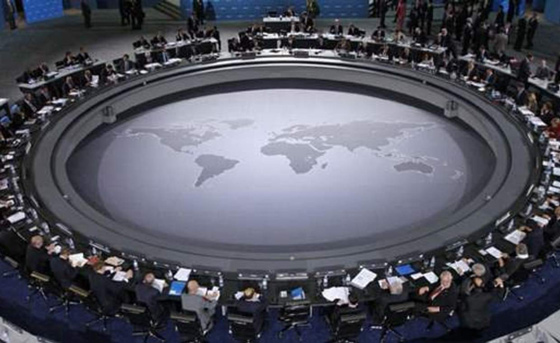 There are enough “National Enquirer” types of headlines in what is purported to be “news,” especially in the mainstream media (MSM). These are “campy” pieces designed to catch the eye: all form with no substance. They are a sleight of hand exercise: feints designed to focus your eyes upon the hand with the handkerchief over the top hat. Meanwhile, the “magician” is stuffing a rabbit into the hat through a hole in the table’s bottom.

Everything is either a diversion or an outright lie, designed to confuse the average mind and to keep people in the endless loop of working (slavery), taxation (theft), regular consumption (based on daily needs of food, fuel, etc.,) and periodic consumption (aligned with the “Hallmark” calendar holidays and emotional heartstrings that mandate spending and make it a requirement, such as Valentine’s Day). Everything is precisely aligned and coincides with the seasons of the year and the business quarters.

We have an economy that is based at least 75% on consumer spending.

There is an objective that is being pursued at an incremental rate of speed, almost that of a moving glacier…but it is moving forward, nonetheless. The objective is to mould the minds of youth to forget their families, neighborhoods, and nation, in order to make them completely malleable and “congeal” their actions when numbers are needed…by fostering groupthink, labeled as “community and political correctness.”

The means to reach this goal is to negate and nullify the effects of the older generations on them…the ones who see through the smiles of politicians and corporate heads and know them for who and what they are, and what they do.

In the July 23, 2018 issue of Time Magazine can be found an almost stultifying, aggravating piece written by James Stavridis, a retired admiral of the Navy, entitled “Democracy Isn’t Perfect, But It Will Still Prevail.” The article is headlined atop of two pages that have a photo of the Acropolis of Greece. Stavridis is old enough to know better and as such, is without excuse: he has been bought off.

The subheading reads thusly (to paraphrase “Upgrayedd” from “Idiocracy”):

Mass migration, terrorism[,] and economic woes are fueling authoritarians around the world.  NATO’s former Supreme Allied Commander on why government of, by[,] and for the people will win again.

Yes, the “mass migration” is on the southern border of the United States, and it is not migration: it is an invasion of illegal aliens entering the country. The terrorism is not external: it is the reverse – an internal terrorism conducted against the citizens of the U.S. by the police departments, federal agents, bureaucracies, and the government.  Economic woes? Yes, our faux fiat currency economy is displaying agonal breathing, yet all the while the bankers’ and brokers’ gains on the Dow and the phony, doctored CBO and Fed numbers are parroted by the fawning sycophants of the media as “economic victories.”

In the article is a picture of the nations of the globe with a pointer-indicator line for certain nations. “United States” has an indicator, and the paragraph describing it is as such:

Rising partisanship has diminished democratic compromise, President Trump’s attempts to discredit the media and the courts have drawn criticism and concern. But democratic institutions and free markets remain strong.

What a crock: that paragraph is a huge crock of dung. The map is color-coded to display nations that are “authoritarian” or “democratic,” and of course, the U.S. falls under “democratic.”

Stavridis wrote this article, and it is a lie. Partisanship has diminished democratic compromise? No, partisanship has been the last bastion of resistance and outrage against collectivism, with the partisanship being conservatives rejecting the transition…the “change we couldn’t believe in” to the quagmire advanced by Obama. As far as the President is concerned, he is not discrediting the media: the media is a disgrace that has discredited itself by pushing a socialist agenda and supporting only one political party for the past century, while hiding the truth and distorting the facts from the public.

As far as institutions are concerned, since when are government-subsidized banks that are propped up and bailed out with taxpayer monies…since when are these “too big to [allow to] fail” banks any part of a free market…or “strong” of their own accord? Since when are the monopolies created for Verizon (to allow NSA and government surveillance over all communications), for General Electric (the “go-to” firm in China with Jeffrey Immelt at the helm), for Bank of America, and all of the others bailed out…since when are these monolithic giants part of a “free market” economy?

Stavridis opened his article with these words:

I spent much of my early adult life on American warships around the world defending democracy against one of its great 20th century enemies: global communism.  The Cold War represented a rare kind of conflict in the span of human civilization, one not between states or princes, but between ideologies.  On one side was centralized authoritarian control; on the other, democratic government of, by[,] and for the people….

When I came ashore and entered the Naval War College in the fall of 1991, it felt like a struggle of historic significance finally had been won.

He continues on to list China and Russia as “trending toward one-man rule,” and listing the many other nations (Venezuela, Bolivia, and Nicaragua, among others) that are “drifting into authoritarian orbits,” as he terms it.

Stavridis does not touch anything that we, the United States have created: he never mentions Ukraine, a country destabilized by Obama, Clinton, Nuland, McCain, and Graham. He does not mention the destabilization created by ISIS, a creation of the State Department of the United States and the Obama administration, a destabilization that has placed half a dozen Arab nations in a state of chaos or instability.

The real kicker that Stavridis has been bought (better, sold himself) is his denunciation of Viktor Orban the Prime Minister of Hungary as following after “creeping authoritarianism.”

Any kind of stance that involves strong nationalism, specifically a nation’s desire to maintain its borders, culture, language, and social structure…any defense of those factors is renounced by globalists and fawning lackeys who champion an “open society” and “democracy.”

Viktor Orban is one of Europe’s last holdouts against a Muslim invasion that seeks through illegal entry (termed “migration”) to displace those factors of nationalism in Hungary, and either kill or enslave its citizens and force them to submit to Sharia law.

Stavridis is so quick to champion the battle of Communism versus Democracy during the Cold War, yet will say nothing of the true battle taking place now, the one far beyond mere “Communism,” per se:

The true battle is a worldwide battle on many different fronts for man to remain free as an individual and not a submissive subject, groveling under collective globalist rule.

Stavridis also conveniently left out his own roles in shaping the world, such as Bosnia and the bombing of Serbia under Clinton. He casually mentions the FARC in Colombia and acts as if the elections there are a clear-cut indicator of an emerging fledgling democracy: nothing mentioned about the phony war carried out against drugs and terrorism by the Colombian government and the U.S. government through the DEA.

Nothing is mentioned how the U.S. dollar is Ecuador’s unit of currency, or how the U.S. just sealed off a natural gas deal to cut Gazprom out of Europe and hurt Russia financially.

Same premise that we won’t use germ warfare weapons against other countries, but we’ll release it (tests) on our own subjects (citizens, if you prefer).

Stavridis’ article is a perfect example of how the MSM works to discredit anything that will work against the movement toward global government and socialism. Lenin himself said that socialism is the final step before communism. It is all about totalitarian rule.

North Korea is (in the minds of most) a dead issue, but in reality it is not. When the Soviet Union collapsed in ’92, all of the merchant-bankers greedily rubbed their palms together and made plans to take it over with Wal-Marts and McDonalds.  Ten years of pillaging the Russian economy occurred, but Russia pulled out of the tentacles and did not end up another vassal state of the Western military and banking hegemony.

The motto of this website is “When it hits the fan, don’t say we didn’t warn you.”

No, really: take a stand and a stance now, in everything that you do.

Madmen run countries and enter into wars that kill millions and then pick up the pieces to reform/restructure the nations and control them. What makes anyone think they are not positioning for these things now? An ounce of prevention beats a pound of cure. We’re in a “lag” time here: a slowdown from the 8 years under Obama, but a slowdown that has not blossomed into a reversal by any means.

Don’t place your trust in any elected official or government: they can annihilate the surface of the globe while they sit in bunkers drinking Taster’s Choice and bourbon, with an army to defend them, all paid for by you and I…our “dime,” so to speak. Trust that? No. Resistance takes many forms, and a refusal to be absorbed into the collective hive is a start. In the end, as Thomas Jefferson pointed out, the Tree of Liberty will have to be watered in order to maintain freedom for all.  In the heart is where it all begins.