Report: This Major Internet Company Has Stockpiled Three Months of Food and $10 Million In Gold For Their Employees: “We Don’t Trust Wall Street” 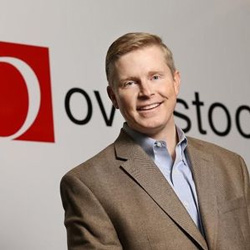 While the world’s super elite prepare everything from stylish bunkers to emergency submarines, most couldn’t care less about their millions of employees should a widespread crisis strike financial markets or the economic system.

There is, however, one notable high net worth exception according to a recent speech from Overstock.com Chairman Jonathan Johnson who notes that after many years of getting hammered by short-sellers they’ve lost total trust in Wall Street and the government’s ability to look-out for the little guy.

As such, Johnson’s company has taken preemptive measures in anticipation of a major event that could take down payment systems, lock up credit flows and make it impossible for employees to meet their basic needs.

Little did we know that Overstock’s Chairman Jonathan Johnson is as vocal an opponent of the fiat system, and Wall Street’s tendency to create bubble after bubble, if not more than Byrne himself.  That, and that his company actually puts its money where its gold-backed money is and in preparation for the next upcoming crash, has taken unprecedented steps to prepare for what comes next.

One week ago Johnson, who is also candidate for Utah governor, spoke at the United Precious Metals Association, or UPMA, which we first profiled a month ago, and which takes advantage of Utah’s special status allowing the it to use gold as legal tender, offering gold and silver-backed accounts. As a reminder, the UPMA takes Federal Reserve Notes (or paper dollars) which it then translates into golden dollars (or silver). The golden dollars are based off the $50 one ounce gold coins produced by the Treasury of The United States. They are legal tender under the law and are protected as such.

What did Johnson tell the UPMA? Here are some choice quotes:

So what do we do as a business so that we would be prepared when that happens. One thing that we do that is fairly unique: we have about $10 million in gold, mostly the small button-sized coins, that we keep outside of the banking system. We expect that when there is a financial crisis there will be a banking holiday. I don’t know if it will be 2 days, or 2 weeks, or 2 months. We have $10 million in gold and silver in denominations small enough that we can use for payroll. We want to be able to keep our employees paid, safe and our site up and running during a financial crisis.

We also happen to have three months of food supply for every employee that we can live on.

Like many Americans who see the writing on the wall, Johnson understands how serious the next financial crisis could be. He specifically mentions a banking holiday, wherein we could well lose access to our money for days or weeks at a time. Such an event would not be unprecedented and it is exactly what we saw happen in Greece when their economy detonated under the weight of excessive debt. What came next was total panic in the streets as Greeks rushed ATMs and grocery stores.

If the money stops flowing we can fully expect a complete breakdown in the regular flow of commerce, a topic that Tess Pennington covers extensively in her highly rated book The Prepper’s Blueprint. She explains that this is what you can expect within 72 hours of a breakdown:

Have you ever heard the saying, “We’re three days away from anarchy?” In the wake of a disaster, that’s all you have is three days to turn the crazy train around before crime, looting and chaos ensue. In reports during the aftermath of hurricane Sandy, residents from Staten Island were pleading for help from elected officials, begging for gasoline, food and clothing.

For whatever reason, 3-5 days following a disaster is the bewitching hour. During this short amount of time, the population slowly becomes a powder keg full of angry, desperate citizens. A good example is the chaos that ensued in New Orleans following the absence of action from the local government or a timely effective federal response in the aftermath of Hurricane Katrina. In such troubled times, people were forced to fend for themselves and their families, by any means necessary.

Several years ago the notion that our financial, economic and monetary systems could fall apart was laughed at by just about everyone. To this day many still don’t believe that it is even a remote possibility. But the elite, including some of America’s biggest business leaders, have the foresight to understand just how bad things can get in a short period of time should the system as we know it experience even a minor disruption.

Even the U.S. government has been simulating the collapse of our financial system, the collapse of our society and the potential for widespread violence. While the results of these dry-runs are being kept secret from the public, we know that they, too, have been stockpiling millions of emergency food rations, firearms, bullets, and other supplies.

It should be obvious they know something significant is on the horizon and that means you should be preparing in earnest just in case they’re right.

How To Prepare For Any Disaster (A Step-By-Step Guide)

Bankers Preparing for Final Phase of Looting: “You Will Soon Lose Everything You Own”