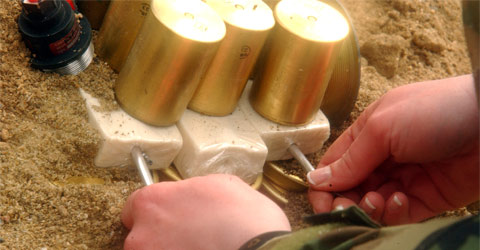 In recent years it has come to light that the Department of Homeland Security has amassed an arsenal that includes billions of rounds of ammunition, high-powered assault rifles, riot gear and armored vehicles. But according to a new report from WND, they’re not the only ones preparing for a future conflict that may involve law enforcement, military and intelligence assets.

The U.S. State Department has now joined the mix, having recently placed purchase orders for everything from plastic and liquid explosives to detonating cords and fuse igniters. It’s not clear what the State Department, whose responsibility is to oversee international relations and  foreign policy via embassies around the world, intends to do with hundreds of pounds of explosives that are likely to be shipped outside of the United States, but it’s clear that whatever the mission may be, it’s not exactly peaceful.

State’s specific mode of distributing the explosive materials remains unclear, as its Diplomatic Pouch Policy explicitly prohibits the shipment of explosives through DPM/U.

State specifically is purchasing – and sending to Sterling, Virginia – 450 pounds of C4 M112 explosives, nearly 2,600 containers of liquid explosives, 188 feet of “linear-shaped charges” and more than 8,000 blasting caps via Solicitation No. FY14-GC-273.

A separate procurement, Solicitation No. FY14-GC-281, calls for 225 pounds of C4 plastic explosives, five pounds of C2 “sheet explosives” and 144 bottles of high-energy liquid explosives. Thousands of additional feet of detonating cord – plus 18,000 feet of military-grade safety fuses and hundreds of blasting caps and fuse igniters – are likewise part of this order.

Finally, an array of “explosive entry systems,” “blasting tubes” and inert C4 and dynamite are sought under Solicitation No. FY14-GC-272.

State separately is buying hundreds of thousands of rounds of live 9mm “ball” ammunition as well as a lesser amount of non-lethal simulated ammo.

Coupled with recent revelations that individuals with ties to terrorism and extremists movements are being allowed into the United States, one can’t help but wonder what the State Department is up to.

Would it be out of the question to suggest that some of these explosives are destined to be delivered into the hands of organizations in the middle east and elsewhere that could use them against western-friendly targets? Of course, the State Department, like the ATF during Operation Fast and Furious, will be sure to track the delivery and transfer of such munitions, so concerns that we’re supplying terrorists with weapons and bombs are probably unfounded.

Maybe it’s just us, but we’re somewhat bewildered at the fact that a law abiding American purchasing a few boxes of ammunition and paying cash can be red flagged as a terrorist, while the actual terrorists (like Mexican drug cartels, et. al.) are being armed by our very own government and purposely kept off of terrorist watchlists that are designed to prevent their entry into America.