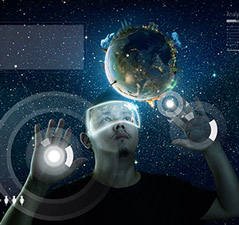 It’s no secret that there exists a cabal of insiders, rich financiers, political leaders and academics who are behind many of the decisions that take place across the world. These tightly knit conglomerates of interested parties are believed to control everything from finance and economics to global resources and warfare. Their influence is quite literally everywhere.

The actions they conceive and then implement touch the lives of every person on this planet. And while sometimes it appears that their ideas are half-baked or enacted with little or no forethought, make no mistake, these people know exactly what they are doing because they have every possible resource at their disposal.

One such resource, as highlighted by Joe Joseph of The Daily Sheeple, is their ability to foresee events before they happen. It may sound far fetched and like something out of a sci-fi movie, but with the advent of quantum computing and advances in artificial intelligence, those in the know actually have the ability to simulate events on a mass scale, in an environment mirroring the complexities of our own world, by using a system called the Sentient World Simulation.

There is a software program out there that’s used by governments across the world and academia called the Sentient World Simulation… It is a super computer that runs a simulated planet earth with 7 billion simulated people that they can then use to run simulations of nuclear war, false flags, economic collapse, poisoning of the aquifers… and they can see what happens before it happens.

That means they can see what happens after a massive stock market crash, how the public will react after a large-scale terrorist attack, what happens if the power in an entire region goes out, how we’ll respond to mass migrations of people from one part of the world to another, and what we’ll do in the event of a situation where the government implements widespread, draconian restrictions on the populace.

There are always going to be anomalies that can’t be exactly predicted by such simulations, but if you think any of the significant goings-on in the world happen by accident or because of coincidence, think again.

If these simulation systems are as powerful as we’ve been led to believe, then there is a strong possibility that everything we see taking place around the world is all part of a very specifically designed plan.

Tune in to Freaky Friday with Joe Joseph and the Woo Crew at 7pm Eastern every Friday.