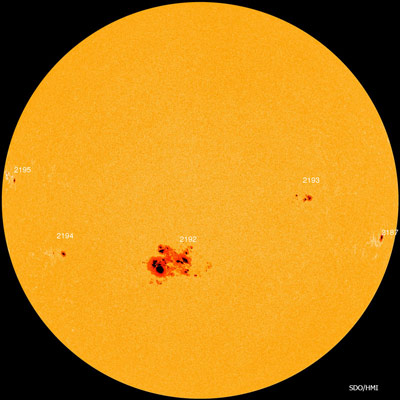 A massive sunspot dubbed ‘Active Region 2192’ has rotated into an earth-facing position. NASA says the Jupiter-sized magnetic anomaly on the sun is crackling with energy and several days ago it fired off an X-class flare right in earth’s direction. Then, yesterday, it launched another flare that was measured to be five times more powerful than the first.

Though the classification of both flares was fairly low and rated in the 1.0 to 2.0 X-class range, the earth’s power and internet infrastructure has experienced some unusual effects over the last 48 hours.

As of this morning, numerous power outages have been reported by internet providers, electrical utility companies, cable companies and even large inter-networks like MSN.com and Amazon. The outages are being reported by users on Twitter all over the northern hemisphere, including from Canada all the way down to Boston. Many of the companies involved have suggested that the outages were planned or the result of wind storms, but what is curious is that at the very same time all of these outages were being reported on earth, the National Weather Service’s National Center for Environmental Prediction (NCEP) announced that their space-based satellite systems stopped reporting data.

But an alternate theory is that the solar flares emitted by AR 2192 have something to do with it. How else can we explain widespread outages for literally hundreds of thousands of people occurring almost simultaneously at key utility and internet nodes across thousands of miles on earth, and happening in tandem with a breakdown in communications from the NCEP’s weather monitoring satellite?

An X-class solar flare designated in the 1.0 to 2.0 range doesn’t usually take down power grids and communications infrastructure, though they have been known to temporarily knock out satellites and cause problems with Global Positioning Systems and radio communications.

The outages being reported by users are more than likely temporary without any permanent damage to the physical equipment involved in carrying the signals from point-to-point.

However, historical examples of large-scale outages resulting from solar flares have been well documented. In 1859 a massive solar flare known as the “Carrington Event” left newly developed Telegraph systems inoperable and reportedly even led them to explode and set stations on fire. In 1989 a geo-magnetic storm caused the collapse of Quebec’s hydro electric power station. The flare that took only 90 seconds to bring the electric company to its knees was a fairly powerful x15-Class discharge.

Given these examples, it’s not out of the question to suggest that a solar flare directly targeting Earth could potentially take out many modern day systems hooked into the grid.

In fact, 18 months ago the sun emitted what researchers called a “Carrington Class” solar flare. It just slightly missed earth, but had the sunspot been earth facing at the time it could have been the Kill Shot that took the majority of the planet back to the stone age.

‘There had been a near miss about two weeks ago, a Carrington-class coronal mass ejection crossed the orbit of the Earth and basically just missed us,’ added Peter Vincent Pry, who served on the Congressional EMP Threat Commission.

Major Ed Dames, who has long proposed that a massive solar event known as the Kill Shot will eventually hit earth, says that when it happens, expect widespread global outages. Unlike what we experience with lower classification X-flares, however a Kill Shot will be a long-term event:

Yeah, if any particular grid goes, they’re not all going to go down at once and some will never go down. The ones that are stretched out over long wide spaces, they will. They will under the right circumstances and the right circumstances are happening real soon, watch the solar flares from (sunspot) 2192 as a harbinger of what’s coming real fast.

When the grids go down, we’re looking at easily no less than 6 months, but probably 2 years. A lot can happen in terms of Mad Max scenarios.

It’s a sentiment that has been expressed by many, including members of Congress, who say that that the threat of a massive solar flare is a clear and present danger to the United States and the world.

We are only one act of madness away from a social cataclysm unlike anything our country has ever known.
-Congressman Trent Franks (R-AZ), Senior Member House Armed Service Committee

EMP is one of the small number of threats that could hold at risk the continued existence of U.S. civil society.
-Dr. Robert Hermann, Commissioner US Congress EMP Commission

Just one violent active region on the sun can cause continent-wide, perhaps even planetary-scale impacts to our critical infrastructure.
-John Kappenman, Principal Investigator US Congress EMP Commission

One study concluded that, because of our complete dependence on electricity for everything from food transportation to gas delivery, should such an event take place it could leave up to 90% of Americans dead within a year.

Tess Pennington, author of The Prepper’s Blueprint, says that if there’s one event that could cause the veritable ‘S’ to hit the fan, this is it:

So, what happens if and when the grid goes down for an extended period of time? Aside from the aggravation of not being able to determine what is happening through traditional media channels, for the Average Joe, his problems have only just begun. Our dependency to the grid doesn’t just stop at lack of electricity in our homes to power our appliances or an inability to charge our cell phones; it is much broader and affects every aspect of our lives.

We are regularly inundated with news reports covering outages that last several days or weeks resulting from inclement weather like snow storms or hurricanes, or heat waves in southern states that threaten to overload the system. During those times, when entire metropolitan areas or regions experience black outs, we get a glimpse into what a truly widespread emergency might look like. It is often the case that the first thing residents of affected areas do is rush to grocery and hardware stores hoping to acquire critical supplies like food, water, batteries, flashlights and generators. And while these supplies acquired at the onset of crisis may provide short term sustenance, any long-term grid-down situation that lasts for many weeks or months will prove dangerous, and perhaps fatal, to the unprepared.

Tess goes on to suggest various strategies designed to prepare you for a widespread power grid outage occurs.

While such an event is unlikely, it remains a distinct possibility. Moreover, as Pennington notes, it is one of the only natural disaster events that would have near cataclysmic global consequences.

The AR 2192 sunspot is just a reminder that it can come at anytime.

The Big Blackout: Why I’m Going Low-Tech to Prep for an EMP

52 Weeks To Preparedness: An Emergency Preparedness Plan For Surviving Virtually Any Disaster [FREE]