Report: 50 North Korean Submarines Vanish From Western Radar: Could They Be Armed With Nukes? 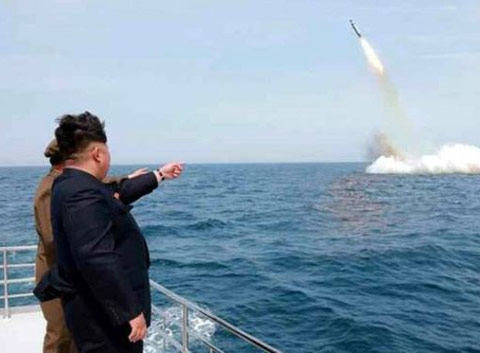 Last week North and South Korea exchanged live artillery fire across the demilitarized zone known as the 39th parallel. The standoff has led to threats from both sides, with a reported doubling of the military personnel and artillery on the northern side of the border.

While negotiators discuss a settlement behind closed doors, the situation remains tense and both countries are maintaining high alert levels.

This morning, it was reported that some 50 North Korean submarines stationed around the peninsula and visible to Western radar systems suddenly vanished, suggesting that the leader Kim Jong Un is preparing his forces for pre-emptive strike in the event that talks between the two nations fail.

North Korea seems to be stepping up preparations for a military provocation even as ongoing high-level talks seek to avert the worst.

More than 50 North Korean submarines have apparently been sent out on mystery missions, and artillery strength and warfare-readiness along the frontline have been raised to the max, a military source said Sunday.

That suggests the North has embraced a two-prong strategy tempering its traditional brinkmanship with diplomacy.

“The current sortie rate of North Korean submarines is as high as 10 times the rate in ordinary times,” a military official said. “Scores of subs that have left their bases on the eastern and western coasts are off our radar, which is an unprecedentedly serious situation.”

Due to North Korea’s notoriously secretive military protocols, it’s anyone’s guess what mission the submarines were given. Some suggest they may be transporting commandos who would launch surprise attacks should talks break down. Other analysts indicate that the North may be preparing for attacks against military and commercial shipping vessels, which would not be unprecedented as evidenced by the sinking of a South Korean naval vessel in 2010.

One major concern among officials in South Korea and the United States is that some of the submarines may be armed with nuclear weapons. The country successfully launched a submarine-based ballistic missile in May of this year and has had an active nuclear weapons program for over a decade.

It has been previously reported that North Korea has developed a high-altitude nuclear weapon known as a “Super EMP”  that could be exploded over the United States causing significant damage to the national power grid. In 2013 North Korea launched a satellite into space that, according to some U.S. officials, may have had a space-based super-EMP weapon aboard, suggesting that such a weapon does in fact exist in the North’s arsenal.

U.S. officials quietly are expressing concern that North Korea could use its “space launch vehicle” to explode a high-altitude nuclear device over the United States, creating an electromagnetic pulse that would destroy major portions of the U.S. electrical grid system as well as the nation’s critical infrastructures.

The concern is so great that U.S. officials who watch North Korea closely are continually monitoring the status of the North Korean “space launch vehicle,” whose status could suggest a pre-emptive nuclear strike against the United States.

Two years on, it’s quite possible that North Korea has modified such a weapon for ballistic missile deployment from a submarine, the effects of which would be catastrophic should Kim Jong Un’s regime decide to attack the United States with a first-strike destabilizing blow in an effort to prevent a coordinated military response should the country move on the South.

This concern recently has been reinforced by a little-publicized study by the U.S. Army War College that said a nuclear detonation at altitude above a U.S. city could wipe out the electrical grid for hundreds, possibly thousands of miles around.

The impact would be catastrophic.

“Preparing for months without a commercial source of clean water (city water pressure is often dependent on electric pumping to storage towers) and stoppage of sewage treatment facilities will require net methods of survival particularly in populated areas,” the military study said.

The May 2011 study, titled, “In the Dark: Military Planning for a Catastrophic Critical Infrastructure Event,” concluded that there is “very little” in the way of backup capability to the electric grid upon which the communications infrastructure is vitally dependent.

An earlier report from the Center for Security Policy warns that a high-altitude nuclear weapon would be so devastating to the United States that as many as 9 out of 10 Americans would be dead within the first year following the attack:

A small-scale, five to ten kiloton weapon detonated 200 miles above Nebraska, or a few weapons detonated 50 miles or so above the eastern, western and central United States would do the job.

The effects would be nothing short of disastrous – literally the end of the world as we know it.

All unprotected and unhardened electrical devices would be left useless.

This means that everything, from the refrigerator in your kitchen to the semi-trucks that carry food across the country, would be non-functioning.

If an enemy of the USA wants to bring America to its knees without rendering the land completely useless, they could do so with an EMP weapon.

We’ve always believed that a mainland invasion of the United Stated would be difficult, if not impossible. But, if an EMP weapon were to be used, our country could effectively be invaded within a matter of months, as most of the population would be wiped out and the government and military infrastructures in disarray.

Source: EMP Threat: ‘Within One Year 9 Out of 10 Americans Would Be Dead’

Last year Joel Skousen of World Affairs Brief warned that the World War III triggering event would likely come from a confrontation between North and South Korea, which are both essentially proxy regimes for the East and West:

The trigger event has to be North Korea… North Korea is the most rogue element in the world and yet it’s been given a pass by the U.S… We don’t do anything to stop its nuclear progress, unlike Iran.

When you see a North Korean launch against the South… and they do some minor military attack every year, so you’ve got to be careful not to confuse those with a major artillery barrage on Seoul. If this ever starts you know you’re days away from nuclear war. People ought to get out of major cities that are major nuclear targets.

Source: The Trigger: If This Ever Happens You Know You’re Days Away From Nuclear War

With the world in economic panic and financial markets failing, it is only a matter of time before government officials start pointing the finger at their foreign competitors. It is a story that has been oft repeated throughout history where those in charge, rather than taking responsibility for the failure of their own policies, instead take their countries to war as a way to maintain power.

Whether North Korea is planning to attack or simply doing this for show as they have done before remains to be seen, but tensions around the world are heating up on the economic front, in cyberspace, and now in military hotpots.

There is a reason that those in the know continue to prepare for widespread disaster. It’s because the reality of such a scenario is more probable now than ever before.

The Prepper’s Blueprint: A Step-By-Step Guide To Prepare for Any Disaster

The Single Most Devastating Nuclear Target In America