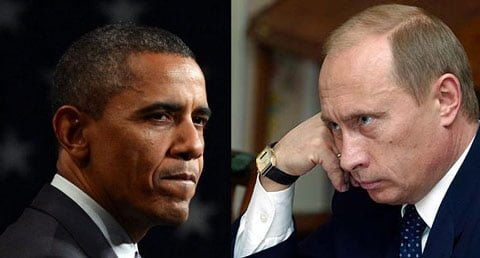 A couple of weeks ago President Barack Obama joined Bob Costas in an interview during the opening ceremonies of the Winter Olympic games being held in Sochi, Russia. The President, who didn’t attend the ceremony or games with other world leaders, chalked off his absence to his busy schedule. Obama sent a delegation in his stead that consisted of various gay and lesbian members, which was an obvious political move intended to highlight America’s outrage over Russia’s recent anti-gay legislation.

Though the President claimed in his interview that his relationship with Russian head of state Vladimir Putin was warm, one can’t help but wonder if things between the United States and Russia have soured significantly. A week after claiming he had too much to do and couldn’t support America’s athletes at the games, Obama took a three day golfing junket with buddies.

Then, out of nowhere, just as Vladimir Putin prepared to showcase his $51 billion games to the world, rioting and rebellion broke out in neighboring Ukraine. Some might say that it is pure coincidence, but as Franklin Roosevelt once opined, “”in politics, nothing happens by accident.” Within days of the uprisings investigations began to reveal that U.S. covert operations groups more than likely played a role.

Coincidence? Maybe. But when considering the same modus operandi appeared in uprisings in Iran, Egypt and Syria over the last several years, we can conclude that the United States was heavily involved in the Ukraine as well.

The timing of the Ukranian revolution was just… a little too perfect.

While it may seem, from our perspective, that the United States has the upper hand because Russian-backed Ukranian President Viktor Yanukovych has been deposed in a mirror event of what happened in Egypt, it should be clear that Vladimir Putin knows exactly what’s going on.

This past August, ahead of a possible conflict in Syria Putin reportedly deployed some 160,000 Russian troops to the region and thinly veiled threats of the potential for a nuclear counter-strike made headlines. President Obama, in an attempt to save face, backed down, claiming the situation had been defused (though no resolution to the alleged chemical weapons attack had been reached).

Now we’re back to the Ukraine, where a similar set of events are in play. And, once again, not willing to blink in any way, shape or form, and as the Olympic Games came to a close, Vladimir Putin is flexing his military might.

According to a report from Zero Hedge, though Ukraine proper is currently in the hands of pro-Western allies, Putin has deployed troops to the Ukranian autonomous Republic of Crimea.

Today at 12:00 from the Russian port of Temryuk should arrive in Sevastopol [Crimea], the large landing ship “Nikolai Fil’chenkov” with 200 soldiers on board. This was reported today by the chairman of the Ukraine “Freedom” faction Oleg Tyagnibok citing sources in the Crimean.

“I can show you the text message” – said Tyahnibok and read: “Today at 12:00 is expected the arrival from the port of Temryuk in the Russian Federation in the city of Sevastopol large landing ship Nikolai Fil’chenkov from the Black Sea Fleet of the Russian Federation. It will bring about 200 armed soldiers from the 328th Marine battalion, who are based in Temryuk and 10 BTR-80.”

He also noted that “on February 22-23, … IL-76 flights airlifted from Kubinka (Moscow region) to Anapa, personnel from the 45th Airborne Special Forces unit and additional divisions were relocated via four Il-76 flights from Pskov to Anapa. And from Sochi to Anapa were transported six Mi-8 helicopsters”- said Tyahnibok.

This appears to not be an isolated move as the naval build up seems to be escalating. In a concurrent release, Izvestia Kiev reported that out of Kubinka, four ships carrying special forces, are being relocated to Anapa. From there, in four hours, they will depart fo Sevastopol at a speed of 10-15 knots, citing “Izvestia in Ukraine” as a source.

A report from Infowars.com indicates that not only are Russian troops now on the peninsula, they have raised the Russian flag over the city of Sevastopol, Crimea and a total annexation of the Republic may be in the works.

Crimea has signaled secession from Ukraine and possible annexation by Russia may be acceptable. The Guardian reported earlier today that a Russian flag was hoisted over the city hall in Sevastopol.

Rumors are rife that Viktor Yanukovych, the deposed president of Ukraine, may be hiding out in Crimea.

John Little at OmegaShock.com penned a brief analysis of the situation in the Ukraine. His insights were eerily prescient. Well before the world was aware of Russian troop movements Little noted that Putin would more than likely be forced to engage in military operations. You see, the Russians simply cannot let the Ukraine fall to the west.

Because of the Carpathian Mountains.

…since Ukraine is on the Russian side of the Carpathians… those mountains would no longer be a barrier to invasion and would double Russia’s vulnerability. Russia would need twice the army to guard that border. And, Russia cannot afford to support an army of that size.

That is why Russia CANNOT allow Ukraine to fall into the hands of the European Union. So, expect Russia to quietly and firmly up the pressure. If Putin can take back Ukraine by covert means, he’ll do that. If the US and EU block covert action, Putin will send in troops.

Though we don’t foresee any widespread military conflict as a result of the U.S. and Russian moves in the near-term, the mobilization of troops and covert forces from both the East and West is indicative of a growing trend, and one that doesn’t bode well for the future of a peaceful co-existence.

Whether it’s the middle east, Asia, north Africa or eastern Europe, Russia and the United States continue to bump heads.

President Obama backed down in Syria.

What happens in the Ukraine remains to be seen, but it should be clear that these regionalized skirmishes will continue in an effort by both Russia and the United States to realize hegemony over resources, geography and political influence around the world.

In an interview with Joel Skousen of World Affairs Brief, it was noted that the eventual result of these mini-conflicts will be nothing short of thermo-nuclear warfare.

President Obama will be on his way in a few years. We can expect Vladimir Putin to be the President of Russia for decades to come. And you can be assured of one thing: Putin wants Russia to be at the top of the food chain and he’ll stop at nothing to make that happen.

One of these days he’s going to get fed up with the games, and along with China, they’ll begin the process of attacking America. In fact, the process has already begun on the economic playing field. Sometime within the next decade, as noted by Joel Skousen, we’re going to see someone push that legendary “red button” and all hell will break loose.

Ukraine may not be the trigger event, but it sure as heck provides an insight into the mindset of the leaders vying for power.

We can be fairly certain that Vladimir Putin is willing to go all the way to protect Mother Russia’s interests. How far is our Nobel Peace Prize winning President willing to go to do the same for the Homeland?