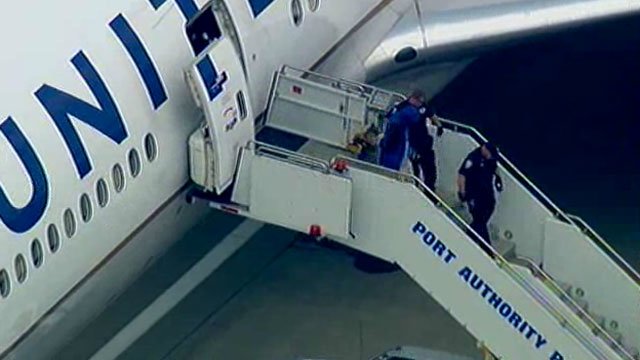 (Passenger Daniel Perry is escorted off of a United Flight originating in Hong Kong.
Is he a national intelligence asset?)

To add further drama and confusion to the story of Edward Snowden, NSA Spying and Central Intelligence Agency involvement, a passenger on a U.S. bound flight out of Hong Kong Monday claimed that intelligence agents had detained him, were going to kidnap him, take him to a safe house, and that they planned to kill him because of his knowledge about the recently released leaks.

According to witnesses, passenger Daniel M. Perry relayed to other passengers aboard the plane that he was a government worker, a claim that was later confirmed by sources.

According to law enforcement officials the man went on a “bizarre” rant. His actions were described by a CBS news report as an “erratic and disturbing anti-government rant.”

Read the eye witness accounts below and listen to some of the audio and decide for yourself.

Are these rantings of a madman? Or, given that Perry has been verified as a federal employee and was on his way to the United States from Hong Kong, where Edward Snowden is reportedly hiding out, could there be more to this story then just another deranged, unruly commercial airline traveler?

“He complained about being shot with darts during the entire flight,” passenger Jacques Roizen told CBS 2’s Tracee Carrasco.

“He said he worked for the U.S. Embassy in Abu Dhabi and he was being detained by the CIA and was being transferred and his life was in danger,” Jones told Diamond.

The situation got pretty unnerving in a hurry, passengers said.

“All of a sudden, there’s a guy screaming about national security, CIA, covert operations,” said Roizen, of Manhattan.

A man who said he was on the same flight as the unruly passenger and recorded the incident with his phone played the audio for reporters. The passenger who recorded the clip did not wish to give his name.

On the recording the man who caused the incident screamed and repeated “I’m dead” 23 times.

“Snowden? No, he’s right! I know this now, I know this because of what just happened to me. He’s totally right,” the disruptive passenger said, then continued to rant about the NSA.

Jones said he never heard the man threaten passengers or the plane. While the plane was still in the air the FBI said the man had claimed everyone aboard the plane was being poisoned, but the agency later said it was working to clarify what the man said.

“He said something that people are going to poison him, that he was going to die,” Jones said.

On the recording the man claimed to work for the government.

In the audio the man claimed to be “dead already, they’re gonna kill me.”

Roizen said he and several other passengers tackled the agitated man and helped flight attendants handcuff him. They helped keep him settled in place until the plane landed five hours later.

Who is Daniel Morgan Perry?

Is he really married to a Chinese spy?

What was he doing on a flight from Hong Kong to the United States, given that he is reportedly a mid east embassy employee?

And why did he freak out about being murdered by the NSA, FBI or CIA?

He did not seem excessively disturbed. He was not running up and down the aisles. He was not attempting to hurt anyone. He was not moving about in any agitated fashion.

He was just yelling in a loud voice to make certain that everyone heard him.

That eye witness report is a far cry from the erratic anti-government rant claimed by mainstream media.