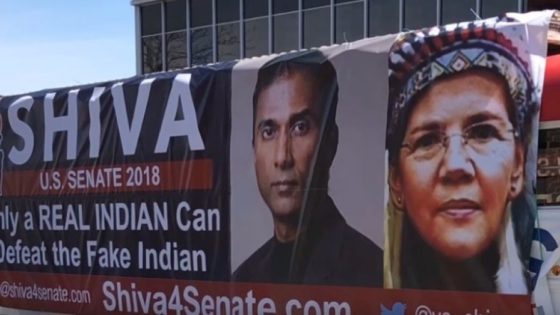 A self-described “real Indian” who is running against Massachusetts Democratic Senator Elizabeth Warren is suing after city officials demanded he take down his signs calling her a “fake Indian.” The independent Senate challenger, Shiva Ayyadurai, filed a federal lawsuit alleging his free speech rights were violated.

Infamously described as “Pocahontas” by president Donald Trump, Elizabeth Warren has lied for years about being of Native American heritage to secure jobs, including one as a Harvard law professor. She’s also refused genealogy tests to prove her heritage and Ayyadurai is finally taking her to task for it.

According to The Washington Times, since March 17, Ayyadurai’s campaign bus has sported two identical signs picturing himself and a rendition of Warren wearing Indian attire. Emblazoned next to the images are the words: “Only a REAL INDIAN Can Defeat the Fake Indian.” The bus has reportedly been stationed in a parking lot in front of an office building owned by Ayyadurai for more than a month, just a mile from Warren’s home.

Warren has faked being of Native American heritage for a long time, and even Cherokee genealogists claim she’s lying and casts doubts on her story of her parent’s elopement.

“The problem with Warren’s story is that none of the evidence supports it. Her genealogy shows no indication of Cherokee ancestry. Her parents’ wedding doesn’t resemble an elopement. And additional evidence doesn’t show any indication of her Herring grandparents being Indian haters.” – Cherokee genealogist Twila Barnes

When asked in March whether she’d agree to calls for genetic testing to resolve the heritage controversy, Warren launched into a family history, as purportedly told by her parents and grandparents, before saying, “It’s a part of who I am, and no one’s ever going to take that away.”

Of course, Ayyadurai’s campaign has problems as well, such as his long-standing claim that he invented email. Ayyadurai supposedly faces “long odds” at beating Warren.