Re-Default: Up To 46% Of Bailed Out Homeowners Can’t Pay Their Mortgage (Again) 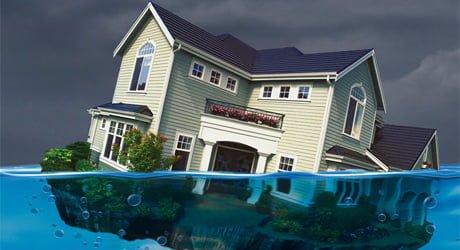 The Treasury Department and managers of the Home Affordable Modification Program (HAMP) are scrambling to figure out why homeowners who used the government’s bailout mechanism to save their homes are re-defaulting on their payments.

The program, originally designed to assist homeowners who were facing foreclosure following the 2007 sub-prime crisis, has reportedly saved 1.2 million people from losing their homes, but a report from the Special Inspector General who oversees the government’s Troubled Asset Relief Program (TARP) says that the loan modifications that were supposed to get American families back on their feet aren’t working as well as expected.

“We launched this program in response to the worst housing crisis since the great depression,” Treasury Assistant Secretary for Financial Stability Tim Massad said in a press call.

“There will always be an inherent risk of homeowner default in programs like this,” Massad added.

Approximately 10% of homeowners with an active HAMP permanent modification — a total of 88,000 out of 865,100— have missed one or two monthly mortgage payments and are at risk of redefaulting out of the program.

The Treasury department is going to launch an investigation into why the program isn’t working.

Not only has the program fallen far short of that goal but with each year of the program, a growing number of homeowners have re-defaulted, the inspector general found.

“Treasury needs to research why so many borrowers are dropping out of the program,” said Christy Romero, the head of SIGTARP.

In 2009, as President Obama assured the nation that his multi-billion dollar economic bailouts would restore the economy and the housing market to stability and growth, we noted that you can modify these mortgages all you want, but that one important factor would be essential to their success.

Unemployment is a ticking time bomb, and no mortgage modification is going to help if the home owner lost his or her income stream. Real estate will continue to collapse because of continued job destruction despite what we are being told about recovery. Couple this with rising costs for essential goods, a collapse in retail consumer lending and increased taxes, and I’d say hopes of recovery are just that… hopes.

For those who live in reality, it’s obvious that the American people are living in the Greatest Depression.

It didn’t take a Nobel Prize winning Keynesian economist like Paul Krugmann to see this one coming. It only takes a working knowledge of basic arithmetic.

If your mortgage payment is $1500 monthly, and you just lost your job and are collecting $800 in unemployment insurance monthly, then it is impossible for you to make good on your loan. Even if the government helps to reduce your mortgage payment to $850 monthly and provides you with emergency funds to cover all of your other expenses like food, health insurance and utilities, you still can’t service your debt.

The situation for America is dire.

According to the June 2013 jobs report, less than half of able-bodied Americans have a full time job.

The following report further illustrates the problem(s) we face.

Two food stamp recipients have been added for every job ‘created’ under President Obama’s watch:

That means that 1.3 Americans have dropped out of the labor force for every one job the administration claims to have created.

There are 15 million more Americans on food stamps today than when Obama assumed office.

That means that more than two Americans have been added to the food stamp rolls for every one job the administration says it has created.

CNS News via The Daily Sheeple

There is no recovery.

There will be no recovery any time soon.

Despite the rhetoric out of Washington, the Fed and mainline financial pundits, this economy is on the brink of complete disaster.