In a breaking development that has been completely ignored by mainstream news sources, the leaking natural gas well near Los Angeles, California is now reportedly spewing lethal levels of radioactive material, according to a report from Steve Quayle and a group with expertise in nuclear material.

A leaking natural gas well outside Los Angeles is spewing so much naturally-occurring Uranium and Radon, that “breathable” radiation levels have hit “lethal levels” according to a Nuclear Expert group.

Hal Turner of Super Station 95 reports that the well is releasing 1.91 Curies (Ci) of radiation per hour.

A curie is a unit of measure in the U.S. to describe very large radioactive releases.

The French utilize a unit of measure called a Becquerel to measure radiation levels. A single Becquerel measures the activity of a quantity of radioactive material in which one nucleus decays per second.

To put things into perspective, Turner explains that a single Curie is equivalent to about 37 Billion Becquerels (Bq) of radiation:

A Becquerel is a much more human sized unit of measure… it’s one radioactive burst of energy per second… One Curie is 37 billion Becquerels per second.

That’s 1.7 trillion Becquerels per day coming out of that natural gas well.

This is a real Fukushima class disaster and it’s happening right here in the USA.

In 80 days of fumes at a pace of 1,115 tons per day coming out of that ground… could carry with it 301.2 terra-Becquerels of natural radioactivity… This converts to a resperable… a breathable emanation of 12 million Sieverts (Sv)… 2.4 million times the lethal dose by inhalation.

In short, the leak is massive and researchers at UC Davis have indicated that they have never encountered as much methane in the air as they have over suburban Los Angeles in recent months.

While resident complaints of feeling ill, vomiting and nausea have been chalked off by officials as the result of breathing in the natural gas, it is quite possible and increasingly likely that what they are experiencing is actually radiation poisoning.

According to one report, the radiation levels in the Chernobyl control room following the 1986 disaster reached about 300 Sv per hour. That was enough to provide a lethal dose to anyone in the room within 1-2 minutes.

While the Los Angeles leak is widespread with radiation disbursing across the city, the fact remains that millions of Sieverts of radiation have been released and will continue to be released until such time that the well is permanently sealed.

The following map shows the spread of methane over the Los Angeles area and researchers from Eco Watch report that elevated levels of natural gas have been detected as far as 10 miles from the leak: 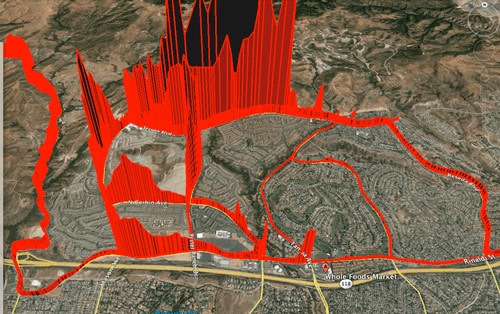 For those living in the area, be warned: you are inhaling deadly radiation. And while the dose is not immediately lethal, prolonged inhalation and exposure may lead to a spike in cancer-related disease and deaths over coming years.

Survive Any Disaster – A Step By Step Guide

How to Survive When a Nuke Is Dropped

An Urban Guide to Surviving a Nuclear Attack