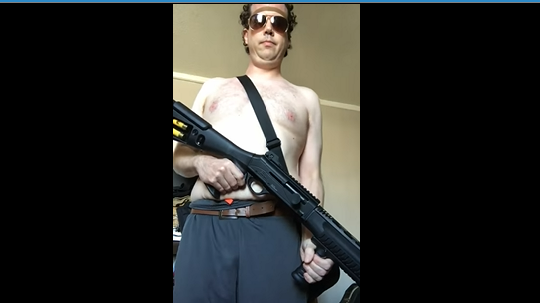 A rabid “anti-Trumper” has been arrested in California for placing menacing videos of himself tossing around threats on YouTube. David Kenneth Smith, a 39-year-old leftist actually recorded himself threatening to go on a “killing spree.”

According to PJ Media, Smith was arrested in Orange County, California, on November 2 following an investigation involving the Joint Terrorism Task Force. He was charged with one felony count of making criminal threats after threatening a university professor through emails and posting threatening YouTube videos — in one he talked about going on a “killing spree.” Police also recovered nine loaded firearms all registered to Smith after his arrest, according to Orange County Sheriff’s Department officials.

Smith, who attended Soka University, sent an instructor “a link to a YouTube video that showed him sitting with a semiautomatic pistol on his chest talking about the university,” according to the Sheriff’s Department. After Smith sent the menacing video, police were called by the instructor and Smith was arrested.

According to the LA Times, in another video, posted last week, Smith goes on a strange rant about choosing between suicide and mass murder in a video titled “What Good Does Killing Ever Do?” In that video, he explored the pros and cons of going on a “killing spree,” and decided that it sounded like a “great idea” compared to dying or committing suicide.

“Should I be homeless or go on a killing spree?” he asks in the video. “I think being homeless is an entirely artificial situation. I wasn’t born here to obey every rule you guys ever made, OK? I was born to be who I am.”

But his odd video titled “Stories From College” is equally disturbing. He’s seen laying in a bathtub with his pistol on this chest looking every bit the creeper.

In the video, Smith claimed to write for a major metropolitan newspaper and for a short time, he contributed to The Orange County Register as a freelancer, according to the paper. “David Kenneth Smith was not an employee of the Register,” a Southern California News Group spokesman said. “It appears he contributed periodically between 2005 and 2008 when the Register was owned by Freedom Communications.”

Smith’s YouTube account, “King David,” is awash with creepy and concerning videos. In one, he mixed together different household items such as incense, antacids, and antifreeze. He also posted several videos about president Donald Trump, including one in which he acts out a bizarre play called “Trump and the Green Berets.”

It looks like Smith may have been a ticking time bomb. Authorities believed his threats were credible. But maybe he’s just mentally unstable.