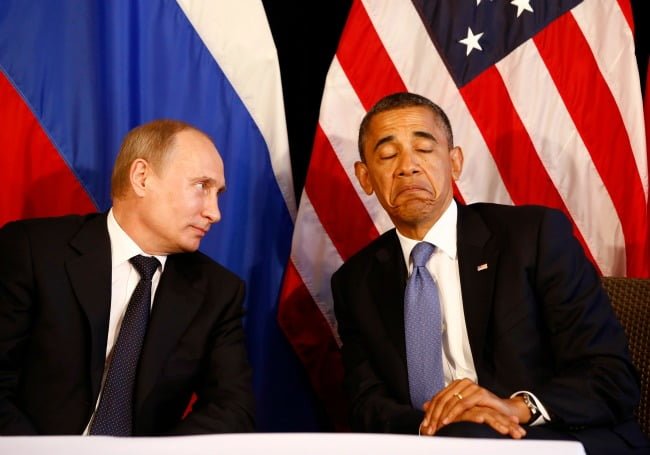 The people are no longer buying the lies.

And it has outgoing-president Obama all worked up.

So does this mean war?

Underlying the post-election hysteria surrounding “Russian hacking” and “fake news” is the basic issue of trust – the U.S. Government, the Congress, the media and most leaders in Washington just don’t have it. So that have to make up reasons.

Anyway you slice it, the complete lack of trust was a major reason for the defeat of Hillary Clinton – widely perceived as corrupt and untrustworthy.

In his most recent statement, an exiting Obama expressed his concerns that Russia’s alleged-meddling in the election went so far as to win over the hearts and minds of the American people – in what would supposedly amount to the ultimate blowback of disinfo and propaganda after decades of pure B.S….

At heart, it is one of his most ridiculous assertions yet.

Outgoing US President Barack Obama has warned Americans and his successor Donald Trump that Vladimir Putin is an “adversary” who should never be trusted over the US intelligence community.

“I think that what is true is that the Russians intended to meddle and they meddled. And it could be another country in the future,” President Obama told the host of ABC’ ‘This Week’…

The outgoing president spoke of a need to unite the country amidst the cyber hysteria that has split the country over the extent of Moscow’s influence in the US presidential race.

“One of the things that I’ve urged the president-elect to do is to develop a strong working relationship with the intelligence community,” Obama said. “We have to remind ourselves we’re on the same team. Vladimir Putin’s not on our team,” Obama added.

“If we get to a point where people in this country feel more affinity with a leader who is an adversary and view the United States and our way of life as a threat to him, then we’re gonna have bigger problems than just cyber hacking.”

It appears to him that some politicians and reporters “seem to have more confidence in Vladimir Putin than fellow Americans because those fellow Americans are Democrats… That cannot be,” Obama stressed.

“[I]n this new information age, it is possible for misinformation, for cyber hacking and so forth to have an impact on our open societies, our open systems, to insinuate themselves into our democratic practices in ways that I think are accelerating,” he said.

In this last sentence, President Obama makes a clear reference to George Soros’ Open Society Foundation and his general hacking of U.S. foreign policy – and his extensive influence over the Democratic party, numerous protest movements (including Black Lives Matter) and color revolutions aimed at toppling regimes in the soft-coup style that Hungarian-born billionaire seems to prefer.

More broadly, Obama has felt the need to justify Putin’s influence because the administration sees a clear threat to the narrative – as the credibility of the intelligence community, mainstream media and ruling establishment drops to zero.

Despite the fact that they continually pump out fairy tales – about 9/11, WMDs, Benghazi, death of bin Laden, ISIS, Syria, and most recently the claim that Russia hacked U.S. elections – this group of sacred cow spy agencies insist that they must be believed above all?

With the CIA openly attempting to pick a fight with Putin, and basically the entire Middle East region, who would even pretend to take what they have to say seriously? It is all propaganda.

What the CIA Does When The Other Side Won’t Fight

President Obama depicts the tyranny of a cold and calculating Putin who dares to pick of the shattered pieces of the faith and credibility of U.S. leadership and media reporting… and that just should not be.

Lies they may be, but lies that must come from Americans’ own government – through the official channels for lying.

It is the lying and misrepresentations of Vladimir Putin and Russia that must be rejected, because those our dangerous lies. Domestic lies are caring, nurturing, patriotic – and for the good of the many.

Losing Hillary’s assumed and ‘deserved’ term at the Oval Office is just the beginning of the injustice. Soon, other Soros puppets won’t be believed either, and what about the plans for war?

It is as if the hot air and noxious gases of the last eight years of foreign policy were supposed to intoxicate everyone into pretending that they don’t see all the naked corruption, overreach and abuses.

That this is normal, and that lies are our staple diet, our chief export and our greatest achievement. But from our enemies – unacceptable.

Just take Obama’s word for it.

Washington Puts Nuclear War With Russia on the Table: “Time to Pay Attention”