Putin Strikes Back: Russia Cuts Off European Gas Supplies, Starts Selling Dollars: “The Decision Has Been Made” 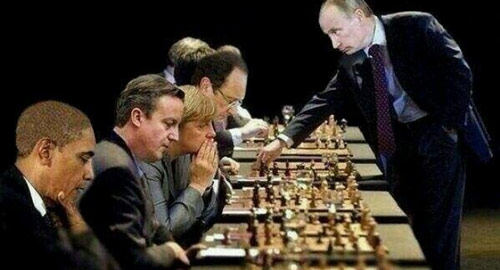 Vladimir Putin has been silent lately. But if anyone thought he had been shamed into defeat or marginalized, then think again.

In the last few hours Russia has announced two key strategic decisions that show they are not going to stand idly by while their economy and way of life are destroyed by Western forces.

First, presumably in response to stiff sanctions leveled by the United States and the European Union after the annexation of Crimea last year, Russia has cut off 60% of Europe’s gas supplies right in the middle of winter. This has caused an almost immediate crisis in six European nations that have seen a complete cut-off to their supplies – Bulgaria, Greece, Macedonia, Romania, Croatia and Turkey – with more to follow. According to reports via Zero Hedge, the effect has been almost instantaneous.

Without Russia residents across Europe have no way of staying warm.

Vladimir Putin ordered the Russian state energy giant Gazprom to cut supplies to and through Ukraine amid accusations, according to The Daily Mail, that its neighbor has been siphoning off and stealing Russian gas. Due to these “transit risks for European consumers in the territory of Ukraine,” Gazprom cut gas exports to Europe by 60%, plunging the continent into an energy crisis “within hours.” Perhaps explaining the explosion higher in NatGas prices (and oil) today, gas companies in Ukraine confirmed that Russia had cut off supply; and six countries reported a complete shut-off of Russian gas. The EU raged that the sudden cut-off to some of its member countries was “completely unacceptable,” but Gazprom CEO Alexey Miller later added that Russia plans to shift all its natural gas flows crossing Ukraine to a route via Turkey; and Russian Energy Minister Alexander Novak stated unequivocally, “the decision has been made.”

Russia has taken similar steps in the past because of non-payment but turned the gas supplies back on once deals were reached.

This time, however, there won’t be a deal.

Russia says it will deliver the gas through Turkey, and then it’s up to the European Union to build the infrastructure that will transport it to the rest of the continent, as noted by Bloomberg.

“Transit risks for European consumers on the territory of Ukraine remain,” Miller said in an e-mailed statement. “There are no other options” except for the planned Turkish Stream link, he said.

“We have informed our European partners, and now it is up to them to put in place the necessary infrastructure starting from the Turkish-Greek border,” Miller said.

“The decision has been made,” Novak said. “We are diversifying and eliminating the risks of unreliable countries that caused problems in past years, including for European consumers.”

Europe, of course, does not have the necessary infrastructure in place for this, and Vladimir Putin most certainly knew this before he shut off the spigots.

Second, and perhaps even more significant than the overt move to show Europe who’s boss, Putin took a direct shot at the United States.

As Bloomberg reports Russia “may unseal its $88 billion Reserve Fund and convert some of its foreign-currency holdings into rubles, the latest government effort to prop up an economy veering into its worst slump since 2009.”

These are dollars which Russia would have otherwise recycled into US denominated assets. Instead, Russia will purchase even more Rubles and use the proceeds for FX and economic stabilization purposes.

“Together with the central bank, we are selling a part of our foreign-currency reserves,” Finance Minister Anton Siluanov said in Moscow today. “We’ll get rubles and place them in deposits for banks, giving liquidity to the economy.”

Call it less than amicable divorce, call it what you will: what it is, is Russia violently leaving the ranks of countries that exchange crude for US paper.

What we are seeing are the strategic moves that will eventually catalyze the next great war. And make no mistake, this is exactly what’s in store for the world should these escalations continue.