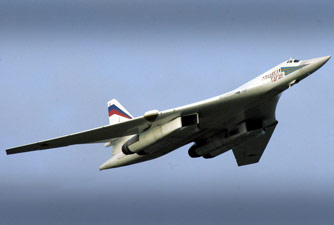 Russian President Vladimir Putin hasn’t been one to back down in response to sanctions against his country and attacks on his economy. Rather, he has stepped up not only his rhetoric, but his military activities as well.

His latest move is yet another show of force to let the West know Russia is prepared to do whatever is necessary to protect its interests.

The U.K.’s Royal Air Force scrambled fighter jets on Thursday after a pair of nuclear-capable Russian bombers flew across a busy civilian air traffic corridor above the English Channel. The bombers had their transponders turned off, British officials said, making them invisible to many air traffic control systems. The incident disrupted multiple flights – and ended with the U.K. government demanding the Russian ambassador appear at the Foreign Office to explain the actions.

This latest incident comes on the heels of similar flyovers by nuclear bombers along the west coast of the United States from Alaska all the way down to California. It has even been speculated that Russia may have tested a new weapon last year leading to a shut down of Los Angeles commercial air traffic control systems.

Earlier this morning former Soviet leader Mikhail Gorbachev said that the U.S. and Russia are engaged in another cold war but warned that it could well go hot should tensions between the two nations continue to escalate.

He accused Barack Obama of adopting a “hostile” approach in naming Russia as a threat to the world in the U.S. president’s speech to the United Nations General Assembly on Sept. 24.

“We hope that our partners will realize the futility of attempts to blackmail Russia and remember what consequences discord between major nuclear powers could bring for strategic stability.”

Putin said that Obama had identified Russian aggression in Europe as one of the three “major threats facing humanity,” alongside the Ebola virus and Islamic State.

“Together with the sanctions against entire sectors of our economy, this approach can be called nothing but hostile,” Putin said.

Russia’s ally against the West, China, also seems to be making some bold moves. According to a new satellite photo taken over the Nanji Islands they are building a refueling complex, the design and location of which indicate they are positioning military assets in anticipation of a war with Japan. In 2010 a missile launch off the coast of California was attributed to China by some observers who believe that they, too, are signaling their willingness to engage in a global conflict should it become necessary.

With the economies on both sides of the pond unraveling, Russian influence in former East Bloc regions growing, and U.S. boots already on the ground across Europe, it may only be a matter of time before the relatively innocuous poking and prodding goes critical.

That nuclear weapons are even on the table is frightening. What’s even scarier are the psychopaths who have their fingers on the buttons.