Prominent Psychiatrist: ‘Real Victims Seeking EXORCISMS Should NOT Be Ignored’ 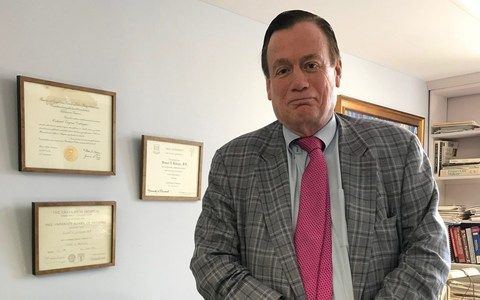 A prominent psychiatrist dealing with the “world beyond” is saying that not only is demonic possession very real, the victims of possession should not be brushed aside.  The number of people looking for an exorcism has risen in recent years putting more of a demand on priests and psychiatrists attempting to help people.

The number of people seeking exorcisms has risen worldwide, and it isn’t just psychiatrists taking notice.  The Vatican even recently completed training for exorcists amid the rise in what some believe to be demonic possession. But whether an outsider believes in possession or not, many do believe they need to be delivered from the demons inside them, making it very real for the victim of possession.

In April, at the Vatican training course for exorcist priests, participants were told that the demand for exorcism is booming as a result of a decline in Christian faith and the internet providing easy access to black magic, the occult, and Satanism.

With 25 years experience in a private psychiatric practice and as a professor at New York Medical College and Columbia University, Dr. Richard Gallagher has a rare vantage point to observe human behavior; and then there is the inhuman. As a sought-after psychiatrist in cases of demonic possession, Gallagher said the initial step in determining the need for exorcism is discernment. Dr. Gallagher has evaluated hundreds of cases of possible possession and, in a wide-ranging and rare interview with The Telegraph UK, explains why he believes, as does the Catholic Church, that the phenomenon is genuine.

In the US alone, the number of priest exorcists has increased from twelve to fifty over the past decade. While demand for exorcism continues to surge, Dr. Gallagher’s medical assessment of whether a person is mentally ill or possessed by demons will help determine whether an exorcism should be conducted.  Describing the Rite of Exorcism as a “delicate and necessary ministry”, the Pope admonished that exorcist priests must be selected with “great care and great prudence.”

Although there are many others who evaluate victims for possible mental illnesses and possession, Dr. Gallagher is one of the few psychiatrists who is willing to even talk about demonic possession. He has also written a forthcoming book on the subject, being published by Harper Collins, called Demonic Foes, A Psychiatrist Investigates Demonic Possession in the Modern United States.

“There are many other psychiatrists and mental health care professionals who do what I do – perhaps not to the scope that I do – who seem hesitant to speak out,” he explained. “That’s what gives my work some singularity. That I have had so much experience and that I am willing to speak out. I feel an obligation to speak out. I think that I should,” said Dr. Gallagher.

Gallagher also noted that of the cases referred to him for possible possession, they are people who “suffer tremendously.” He said: “There is very strict criteria for determining the person’s problem. I am not just intuiting. I’m dealing with it from a very scientific point of view.”

“There are cases of spirit possession in pretty much every culture,” he said.

Dr. Gallagher has directly observed 100 full blown possessions over the past twenty-five years. He has attended a few hundred other exorcisms as an observer, none of whom were his patients. He only attends exorcisms where the team “knows what they’re doing,” and that includes proper restraint of the victim to prevent that person from trying to run away or attack the exorcist. In the United States, the victim must sign a legal form indicating they have agreed to the ritual. According to Dr. Gallagher, when the demonic is accessed, the demon is in control and “would do all sort of things if not restrained”

Dr. Gallagher also says that demons have been observing human beings since the beginning of time. “They’re [demons] very, very smart. The intelligence level of a fallen angel, which is what I call them, is far superior to human beings. Which is why they denigrate human beings. They sometimes call us ‘monkeys’,” he said.