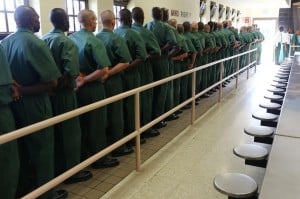 The realities of globalization have made the price of labor somewhere between rock bottom and worthless.

Since the days of NAFTA, the WTO and a flood of cheap Chinese goods, major corporations – American-based and all the rest — have offshored production, taking advantage of virtual slave labor and the only edge that this kind of competition brings.

But now, American companies are taking advantage of something better than low-wage offshore labor – straight forward prison labor may be the best of both worlds for mega-corporations.

Now they are proud of it. Just see this promotional video:

They boast the ‘advantages of domestic contact centers at offshore prices.” It just isn’t fashionable to call it slave labor anymore.

Of course, the inmates aren’t getting rich. They work for pennies which gradually go towards heavy fines and fees levied on inmates inside the private prison system that must be re-payed, along with the time they are doing.

This treasure trove of privatized slavery is managed by UNICOR, a government corporation managed under the Federal Prison Industries, who are officially “dedicated to employing inmates across the U.S. and providing them the job skills needed to succeed in life.”

Ludicrously, the program promises benefits to the prison workers too, offering them job skills and experience – for jobs that won’t exist outside of prison because they are directed through the corrections system. The Intercept writes:

That’s the message of Unicor, also known as Federal Prison Industries, a government-owned corporation that employs federal workers for as little as 23 cents an hour to manufacture military uniforms, furniture, electronics and other products.

What’s more, businesses that partner with FPI are organized and regularly lobby the government on prison-related issues. Their trade group, the Correctional Vendors Association, lobbied Congress last year on the Justice Safety Valve Act, a bipartisan bill giving judges the power to impose a sentence below the mandatory minimum, including in drug-related cases.

Then, the products from these giants businesses in turn drown out any meaningful competition with rock-bottom prices that no mom-and-pop or honest business could match.

Not only is it a shame that this has become reality, but that those running the system are proud enough of it to advertise it as the industry’s “best kept secret.”

How many other dark secrets are lurking behind the stagnate and hopeless job economy?

Don’t bother asking, just keep on buying up cheap plastic goods and reaching for a government hand out. Yeah… the good life?