President Obama, for the third time during his presidency, has bowed when greeting another leader. This time, the leader Mr. Obama bowed to was Tampa mayor Pam Iorio: 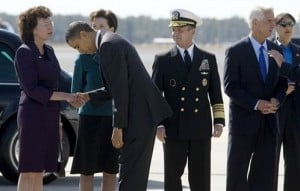 Perhaps the picture is taken out of context, but the Associated Press makes it clear in the photo description:

Last year, the President took flak for bowing to the King of Saudi Arabia: 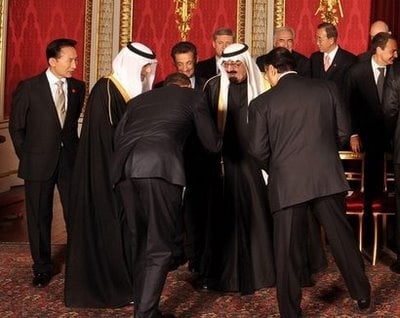 World Net Daily points out that Mr. Obama was the only world leader who greeted the king in this manner:

The action appeared especially awkward since among the dozens of world leaders and their spouses, handshakes abounded, but there appeared to be no other bowing in the room.

The U.S. State Department’s office of protocol, in a statement attributed to acting chief of protocol Gladys Blouda, confirmed the type of greeting between heads of state depends on the customs of the countries, but a handshake is the most common form of greeting.

Following up the Saudi Arabia bow, the President did not disappoint when he got to Japan: 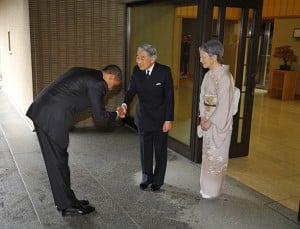 While most democrats argued that the Japanese use bowing as a standard greeting, former Vice President Dick Cheney vehemently disagreed:

“There is no reason for an American president to bow to anyone. Our friends and allies don’t expect it, and our enemies see it as a sign of weakness.”

An unnamed senior administration official disagrees and says it was not a sign of weakness:

A senior administration official called the bow to Emperor Akihito a â€œsign of respect,â€ adding that the depth of the bow reflected â€œthe level of respect.â€

â€œThis is part of what the president says all the time â€” that he wants to be mindful of other cultures,â€ the official said. â€œThat doesnâ€™t take anything away from our culture.â€

Note that no other world leader bowed when meeting emperor Akihito.

Mr. Obama continues bowing as he meets the Chinese Premier: 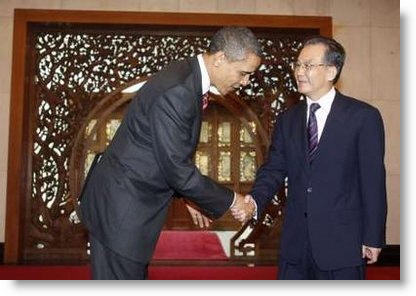 If the statement from Gladys Blouda of the Office of Protocol is correct, then it can be argued that the President is within protocol when he bows to foreign leaders in countries where bowing is considered a sign of respect and greeting.

Mr. Obama is not the first President to bow before other world leaders, with Presidents Eisenhower and Nixon having bowed before the President of France and Emperor of Japan, respectively: 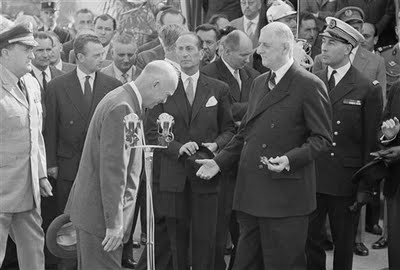 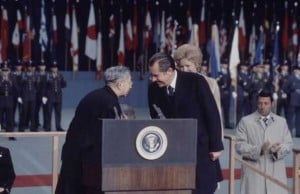 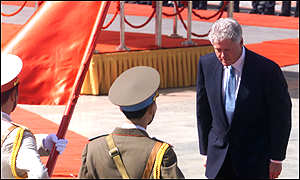 Did his upbringing make this a habit? It’s one thing for the administration to suggest that bowing before a world leader such as the emperor of Japan or King of Saudi Arabia is protocol, but a mayor of a US city?

As bowing is not a traditional greeting in America, one must inquire as to the origin of the President’s habit. The only other plausible explanation for this etiquette would be that the President picked up this habit in Indonesia, where he lived from the age of 6 to 10.

Shake hands and give a slight nod when meeting for the first time. After the first meeting, a handshake is not necessary; a slight bow or nod of the head is sufficient. Shake an Indonesian woman’s hand only if she initiates the greeting.

While President Obama may have been trying to respect the culture of Saudi Arabia and Japan, Newsmax puts forth an argument based on American values and Constitutional idealogies for why American Presidents Should Not Bow to Foreign Royalty:

There is a lesson here for President Obama, who appears intent on upending more than two centuries of American protocol. When he as president bows before a Saudi king or a Japanese emperor, he is sending an implicit message to millions of people around the world that the leader of the free world accepts the notion that some people are born to a higher rank than others.

But when our president stands up straight and extends his hand in friendship to all civilized nations, there is no danger, there is only opportunity â€” opportunity to communicate the values and spirit that Jefferson so eloquently conveyed to the rest of the world â€” â€œthat all men are created equal, that they are endowed by their Creator with certain unalienable Rights, that among these are Life, Liberty and the pursuit of Happiness.â€

The conduct of our president when he deals with foreign leaders is a serious matter. After all, he represents the American people and our Constitution.

Indeed, when President Obama bows before a foreign leader, the whole country bows with him.

If this is the case, then we must also accept that every American reading this post has not only bowed to presidents, emperors, and popes, but has also given a kiss to and held hands with the King of Saudi Arabia: 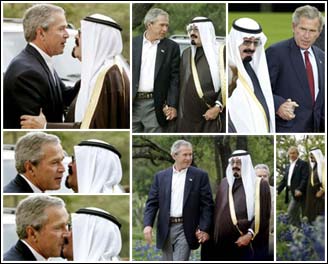 We are free men, and our President does not hold his position because of, as Daniel Ruddy put it, “bloodlines or royal coronations.” As a representative of the people, the President should act in this manner and not defer to another leader. In Japan, Saudi Arabia, Indonesia and Europe bowing may be a greeting or sign of respect, but in the United States it is often perceived as a submissive act.

It seems that the line between bowing as a sign of respect, salutation and submission is blurred, as is clear by the arguments put forth by supporters and detractors related not just to President Obama’s bows, but those of Nixon and Eisenhower, as well. Until this has been cleared up, there will likely not be any resolution to the issue of bowing in the presence of foreign leaders, and whether or not a President bows will come down to his (or her) personal views on the matter.