Prepping for Normal People: How to Prep When You’re NOT an Epic Wilderness Survival Guru 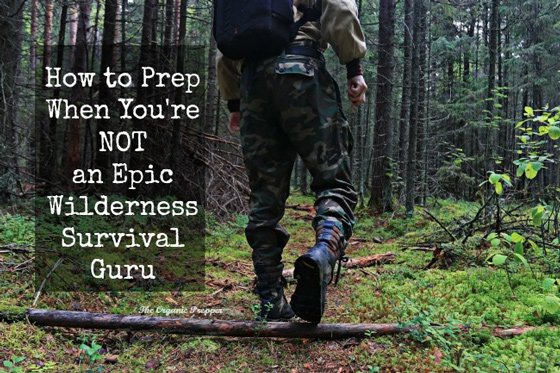 Did you ever read a blog post on a prepper site and sigh, because the person writing the post seemed to have been born a survivalist?

In your mind’s eye, you could envision them at the tender age of six, weaving a snare from some vines that they wisely assessed not to be poison ivy, catching a rabbit, skinning and gutting it with a pocketknife, and cooking it over a fire they started with two sticks that they rubbed together, while wearing their little elementary-school-sized camo outfit.

But not everyone can be Daryl Dixon

Normal people can survive, too.

Prepping for normal people often seems out of reach, but it’s not as outrageous as it sounds.

In fact, I really don’t believe that the majority of preppers actually are rugged survival gurus. Most of us had to make a conscious effort to learn

. Most of us aren’t wilderness guides or professional hunters or military special forces operatives.  We don’t regularly pop a deer in the backyard with a homemade bow, we don’t have a bunker with 30 years of storable food and an aquifer we can access from within the safety of its walls, we don’t isolate our children from all forms of popular culture, and we don’t live in the middle of nowhere, so deep in the woods that we have to carefully climb a tree while clenching a laptop in our teeth to get an internet signal. We aren’t all off-grid homesteaders that weave our own fabric from the sheep we nurtured through a Himalayan winter.

We are regular moms and dads. We are grandparents or teenagers. We go to the movies, grab an occasional coffee at Starbucks, and shop at Safeway. Our kids have friends whose parents would have no clue what to do in a disaster. We have Golden Retrievers, Pomeranians, parakeets, and cats.  We have jobs with officemates who have no idea we possess a year’s worth of beans. We live in downtown apartments, Victorian cottages, and raised ranch homes in the suburbs.

There’s something that sets us apart from the normies.

The thing that sets us apart – and sets you apart too – is the willingness to accept that life is not rainbows and lollipops. Not only do we accept it, but we do our best to take responsibility for our families should a disaster strike, whether that disaster is something on such a grand scale that it affects the entire region, or so small and personal that it only affects those living in your home.

So don’t read that stuff and sigh anymore. While there are those people who truly have been born to the lifestyle, most of us aren’t that way.

And that means we all started somewhere.

Maybe it was the realization that it was better to buy more of the sale stuff so we’d have it on hand for lean weeks. Maybe a week-long power outage occurred and we didn’t want to be caught with our drawers down again. A storm, a job loss, a devastating illness – whatever the reason we started, chances are we didn’t start out by moving to a yurt in the wilderness and living off the land.

Anyone can do this.  Anyone.

All it takes is the willingness to learn and the enthusiasm to practice.  Preparedness is an evolution, one that we all begin at a different place.

I grew up a pampered city girl. My family was reasonably well-to-do, and when we went on vacation, we usually stayed at resorts or nice hotels. We didn’t ever go rough it in the woods, and the one time we “camped” (when I was about 6 years old) it was in a luxury trailer with a bedroom and a functioning bathroom. Needless to say, very few wilderness survival skills were learned. In fact, my mom didn’t even want me to walk out into the woods because she was worried I’d be bitten by a snake.

Fast forward to adulthood, when I was a single mom with two girls. I had been prepping for years, building stockpiles, learning to can, and doing all of the stuff city preppers do. I decided to up the ante, and when my oldest went off to college, my youngest and I moved out to the boondocks of Ontario, Canada. It was then that I realized I had no freakin’ idea what I was doing. None. I couldn’t even build a fire in the woodstove that would stay lit, and the woodstove was the only heat in the cabin. I thought, “What the heck have I done?” I wanted to bail, but I didn’t have enough money to scurry back to civilization.

I learned to build a fire, stack wood, deal with 5 feet – yes, 5 feet – of snow, avoid attracting bears to our cabin, paddle a canoe (once I finally learned to get in the canoe without flipping over), cook on  a woodstove during a blizzard power outage, live with intermittent running water and electricity – all sorts of stuff.

And I didn’t do ANY of it right the very first time I did it.

I broke things, froze wood to the wall of my cabin, shivered when the fire went out, freaked out when there was a bear on my porch, climbed out a window and dug my shovel out of the snow with cooking pots because I had left it outside and snow had blown against my door, burying the shovel and trapping us inside. Seriously, no one ever would have made a cool show about us living in the woods, not unless it was a comedy.

Anybody can learn, even a city girl like me.

I am MUCH better prepared after the year we spent doing that stuff. Now, that stuff is easy for me and I could flawlessly demonstrate many skills while people looked on, impressed. But it didn’t start out that way. I often meet people who are far more skilled than I am and I welcome the chance to learn from them.

I’m not writing this so you think, “Wow, why would I take any advice from her, ever? She didn’t even know how to build a fire a few years ago.”

I’m writing this so that you don’t become discouraged. So that you remember that preparedness is an evolution. It’s a journey that starts when you do.

Wherever you are right now is a great place to start. The best! If you are willing to research, learn, and practice, in 6 months you’ll be amazed at how much your skills have improved. If you start building your supplies now, no matter how slowly, in 6 months, your stores will have increased.

So get a few good books, find some good websites, and tackle some skill-building.

There are some awesome epic wilderness survival gurus and some off-grid families that truly want to help and teach. I know some of them. And there are some arrogant jerks who think that their way is the only way, and that anyone who is unlike them doesn’t stand a chance.  I know some of them, too. If a so-called teacher makes you feel like you don’t stand a chance because of your current point in the journey, get as far away from that person as possible. Whatever they have to teach you will be drowned out by the noise of their derogatory and discouraging attitudes.

There are many positive places to learn, like this website. Places where you can feel free to ask questions without feeling embarrassed.  There are warm and inviting places on the internet where people aren’t judgemental and where they gladly share their knowledge with newcomers.

You don’t have to start out as an epic survival guru.

No matter who you are.

No matter where you are.

All it takes to improve your chances of survival is the willingness to learn and the courage to try.

Check out these warm and welcoming preparedness websites:

Most of us didn’t spring from the womb with a fire-starting flint and a #10 can. Most of us started exactly where you are now.