Power Outage Wreaks Havoc in NYC: “There Appears to Have Been No Plan for This Type of Catastrophic Failure” 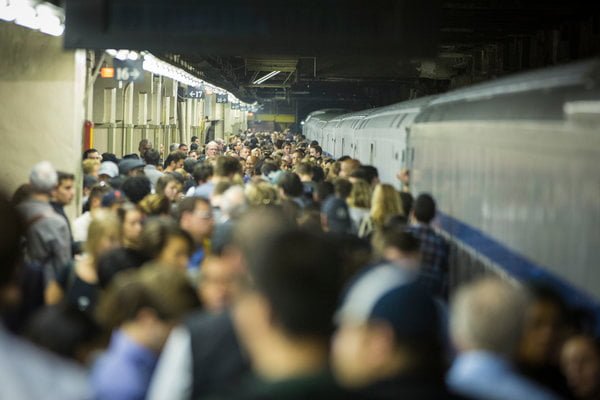 (Pictured: Thousands of commuters at Grand Central Station try to figure out how to get home amid power outage)

Outgoing Department of Homeland Security Head Janet Napolitano has repeatedly warned of the imminence of a widespread power outage originating from a rogue attack on the nation’s electricity grid.

They know such an event is coming, and in a couple of months they’ll be running a full-scale simulation involving hundreds of government agencies and businesses across North America to prepare for it.

The fact of the matter is that America is not ready for such an event – be it a man-made attack or a natural disaster.

This is just a taste of what we can expect if it were to happen nationwide all at once:

Tens of thousands of commuters scrambled Thursday for alternative transportation between the Connecticut suburbs and the city as a power failure disabled one of the nation’s busiest commuter rail lines for a second day.

Parts of Interstate 95 were backed up for hours as transit officials scrambled to find alternative power sources and avoid what they said could be weeks of snarled commutes.

Amtrak trips between New York and Boston are running as much as 90 minutes late because of congestion caused by the commuter line outage.

Marjorie Anders, a spokeswoman for Metro-North, said officials are working to accommodate riders after power was lost along an 8-mile stretch of track…  The line serves 125,000 daily passengers at 38 stations in 23 towns.

“This is not an act of God as we normally treat weather conditions,” he said standing in Grand Central Thursday night. “This is a failure, for one reason or another, of the system.”

The New York-based utility Consolidated Edison plans to set up three transformers to bring 13,000 volts to a line that failed Wednesday, but it is unclear how many trains could be served with the added power since the line normally requires 138,000 volts, Malloy said.

“There appears to have been little to no plan for this type of catastrophic failure,” he said, explaining that a two to three week repair time was unacceptable.

The source of a power failure has not yet been determined, said Allan Drury, spokesman for the utility Consolidated Edison.

After hundreds of billions of dollars spent by Homeland Security, FEMA and other emergency agencies, there was no plan!

It should be clear that, despite all of the rhetoric coming from emergency planners over the last decade, New York City (and the country as a whole) is totally exposed to a large-scale catastrophic emergency that brings down the power grid.

This isolated incident, like Hurricanes Katrina and Sandy, prove yet again that the system as a whole will break down rapidly should disaster strike on a mass scale.

Whether a grid-down event comes a as result of a cyber attack, super EMP weapon, or a solar flare from the sun, the consequences would be devastating and almost instantaneous.

Millions of people would be stranded with no way to get home. Grocery and convenience stores would empty of food and potable water within a matter of hours, perhaps even minutes. Transportation, communication and commerce systems would come to a standstill.

This would be nothing short of one of the most horrific scenarios imaginable.

What’s more, as evidenced by the events in New York, should the three major power grids across the country go down, there is no bringing them back in a timely fashion. Former Congressman Roscoe Bartlett has warned that the grid components required, such as transformers, are not easily available and could take as long as 18 months to bring online.

We could have events in the future where the power grid will go down and it’s not, in any reasonable time, coming back up. For instance, if when the power grid went down some of our large transformers were destroyed, damaged beyond use, we don’t make any of those in this country.

They’re made overseas and you order one and 18 months to two years later they will deliver it.

Our power grid is very vulnerable. It’s very much on edge. Our military knows that.

That’s a huge problem, and one that promises to lead to a widespread population “die-off”, as noted by a recent study from the Center for Security Policy:

Within a year of that attack, nine out of 10 Americans would be dead, because we can’t support a population of the present size in urban centers and the like without electricity,” said Frank Gaffney, president of the Center for Security Policy.

That’s why Roscoe Bartlett and others have suggested that those with the ability to do so should move their families out of major cities and prepare an individual preparedness plan to ready themselves for the absence of government assistance for extended periods.

The threat is real and today’s events in New York should make it clear to everyone that we are not ready for it.