As a review of some of the current events that have been taking place in the U.S. recently, on 11/5/18, Anne Arundel County Police in Maryland shot and killed a man as they attempted to exercise a “red flag” gun removal order. Those “red flag” orders went into effect on October 1 of this year. Let’s take the definition of this new “game” directly from Wikipedia and examine it:

A red flag law is a “gun violence protection” law that permits police or family members to petition a state court to order the temporary removal of firearms from a person who may present a danger to others or themselves. A judge makes the determination to issue the order based on statements and actions made by the gun owner in question. After a set time, the guns are returned to the person from whom they were seized unless another court hearing extends the period of confiscation.  Such orders are known as “Extreme Risk Protection Orders” (ERPO) in Oregon, Washington, Maryland, and Vermont, as “Risk Protection Orders” in Florida as “Gun Violence Restraining Orders” in California; as “risk warrants” in Connecticut; and as “Proceedings for the Seizure and Retention of a Firearm” in Indiana.

Returning to the incident in Maryland, take a look at this excerpt from CBS News from 11/6/18:

Neither of the officers were injured. Their names weren’t released.

It wasn’t clear why the “red flag” order was issued. A spokeswoman for the Maryland Judiciary denied a request from the Baltimore Sun to release protection order requests associated with the home, citing the law which states the orders are confidential unless a court rules otherwise.  Michele Willis, the man’s niece, told the Baltimore Sun that one of her aunts requested the protective order against Willis, but she declined to say why.

Maryland’s law, which went into effect Oct. 1, is more broad in that it allows certain health care providers to seek an order, in addition to family members and law enforcement.

LOOK HOW THINGS WORK IN THE TOTALITARIAN HEIR TO THE SOVIET UNION THAT THE UNITED STATES HAS BECOME!

Sounds as if it’s something right out of Solzhenitsyn, but here it is:

That’s it. Everyone with the “300 Spartans” patch and the “μολὼν λαβέ” or “ΜΟΛΩΝ ΛΑΒΕ” written on their sleeves? [ Translation: “Come and Take it!” ]

Yes, they will. They are. For now, they’re attempting to do it without a fight…passing the legislation (or circumventing it, rather) and forcing the compliance of the citizenry. They are in the process of doing far more, and another episode really summarizes the key concept: the Totalitarian mindset of elected officials. This piece is entitled, “California Democrat threatens “Nukes” if Americans don’t hand over their guns.”

This threat is not figurative: it is literal.

I strongly recommend reading the whole article. Democratic Congressman Eric Swalwell (D, CA) is proposing that the government offer up to $1,000 for semi-automatic weapons, and a “buy-back” to place those firearms in the hands of the government…for an estimated cost of $15 billion.

Here’s a photo of Eric Swalwell for you: 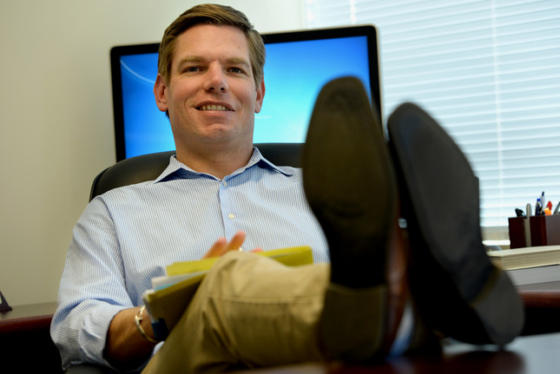 Just think: this is probably the pose he will strike when he’s evacuated to Cheyenne Mountain, or Denver, CO to escape nuclear war when it comes…on your taxpayer dollar…fully supplied with provisions, protection, and with his family by his side. An elected official…one of your “representatives.” Eric Swalwell: menacing a U.S. citizen with the threat of the U.S. government’s nuclear weapons. And to “frost the cake,” here is a direct quote from Wikipedia that you’ll just love, emboldened to the max so you can keep him in mind. He’s been in office since 2013. Remember Obama? Well, here’s the fresh, clean-cut guy with Northern European heritage to attract the women voters and who can seem as “one of the people” to the gullible….here’s the quote, with punch-line underlined:

“Swalwell has been mentioned as a potential presidential candidate in 2020, and has publicly expressed interest in such a prospect.”

President of the United States. Mind you, this guy is trying to “one up” a citizen, blustering and menacing with an allusion to the U.S. nuclear arsenal being used on the citizens.

Remember that scene out of “The Dead Zone” where Martin Sheen shields himself from Christopher Walken’s bullet by using the baby as a shield? Yeah. Here’s that kind of thing all over again.

This next quotation is a variance from one reported by Peterson in “The Daily Oklahoman” in 1951, as first attributed to Alexander Fraser Tytler (although many think it’s De Tocqueville’s):

“The American Republic will endure, until politicians realize they can bribe the people with their own money.”

In this case we have a (Mis)Representative of the U.S. Congress who wants to use public funds with the threat of force behind them to engineer social change (in this case, the purchase equals the removal of semiautomatic weapons from the hands of the citizens). Legislation toward that effect is being crafted: Legislation is a tool in the hands of the globalists to institute social change.

Social engineering is accomplished in this manner: 1) the Politician is elected, 2) the Politician is then Titled, 3) the Representative/Senator/Official then uses his position to circumvent or ignore the will of the people and institute social form not generally agreed upon by his/her constituents.

The laws are emplaced, the courts uphold the laws, the police will kill you if you do not obey the laws, and the Media-Hollywood complex shapes the public’s awareness and perceptions, pushing the paradigm toward Communism with the mantra of “community.” The shift is duplicitous to help ensure obedience, compliance, and conformity…and by creating such “believers,” they marginalize everyone outside of their construct.

This wretched piece of garbage masquerading as a “Representative” actually used the literal threat of nuking…with nuclear weapons…those who will not comply with such an order. Another “Marbury vs. Madison” affront to the people and onerous to the Constitution that does not hold the true effect of law.

Nevertheless, you can hold up your copy of the Constitution when a squad of jackboots kicks in your front door with masks and MP-5’s…hold it up and tell them about your rights. “Molon Labe?” Yes, they will.

Here is the Tweet Swalwell sent back in response to someone who stated he will refuse such a confiscatory order (in graphic terms) and that it would amount to citizens declaring war against the government. Pay attention. This is Swalwell’s reponse:

And it would be a short war my friend. The government has nukes. Too many of them. But they’re legit. I’m sure if we talked we could find common ground to protect our families and communities.

The infant in his arms is a nice touch. This man should be removed from office immediately, no questions asked…placed upon administrative leave and then brought to bear for his statement.

The mindset is the danger: this is not the exception among politicians, but the norm. In these “neo-feudal” times, you the citizen are expected to wear your “uniform,” the tan (called “khakis” erroneously…a fabric composition substituted for a “color”) pants, and the red shirt of Target or the navy blue shirt of Wal-Mart. Wear them, and the little name tag, and give half of what you make to the government…and allow them to craft your lives…as you obey.

Once again, the “Benjamin Martin” character in “The Patriot” portrayed by Mel Gibson…that character’s lines were correct:

They are coming for the guns. They are marching forward with their legislation, to provide “legitimacy” for their actions “under the color of law.” Their doorkickers are “ass-kickers,” in good shape and sharp reflexes with good mental acumen. They are “psychologically protected” to allow them to act with full force without restraint: protected with direct deposit of their check, protected with life insurance, and protected with healthcare for their families…all of their basics taken care of, plus a badge: they’re covered, when they come for the citizens.

The last step for a full-blown tyranny before the actual collapse (political, military, economic, or a combination thereof) is evident in the tyrannical measures and inflictions they foster against their own populace. These two examples cited here? They are no longer the exceptions. They are the norm, the normative behavior of a police state…a “soft” socialist society that is just a tiptoe away from a full-blown dictatorship, complete with death camps and firing squads without trials. To deny such a thing is a form of intentional blindness toward the current events, and the recurring theme of the history of man. We are seeing it unfold, and when it opens completely, it will not be a flower, but a hydra that will devour any of those who are unprepared for the long and protracted struggle to come and who are unprepared to show resolve and reclaim the rights earned for us by the Founding Fathers of the United States.