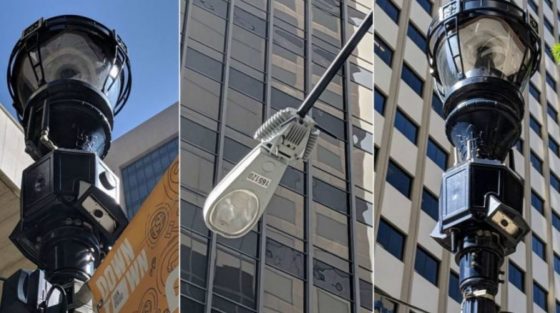 Gone are the days when cities used streetlamps to simply illuminate sidewalks and streets. Today’s streetlamps are being used to form an interconnected web of surveillance devices.

A recent San Diego Union-Tribune article revealed how San Diego police officers have used streetlamp video surveillance in at least 140 cases and sometimes as frequently as 20 times a month.

Let that sink in for a moment; spying streetlamps are real and police have already requested video footage from more than 140 streetlamps.

Lt. Jeffery Jordon called spying streetlamps “game-changing” and that is exactly how they should be viewed. Streetlamps that are designed to spy on the public really is a game-changer.

San Diego’s street lamps are also equipped with ShotSpotter microphones that police claim are not being used to listen to public conversations.

Should we believe them?

It was only three years ago when the NJ Transit secretly used DriveCam’s LTYX cameras equipped with microphones to listen to public conversations.

So just what is law enforcement using these streetlamps for?

No one knows for sure, but a spokesperson for San Diego Mayor Kevin Faulconer said that a citywide policy to regulate the use of the microphones and cameras in streetlamps is “under development.”

Just how concerned is the City Council that law enforcement is using streetlamps as surveillance devices?

Apparently not very much, as City Councilwoman Monica Montgomery admitted, by saying that she’s “open to exploring” oversight of the program.

In what dystopian nightmare are we living in, where listening and watching everything we do in public is “under development” or “open to oversight”?

Over the past few years, I have written numerous stories about smart streetlamp/streetlight surveillance.

But this story is far more disturbing than those because as the San Diego Union-Tribune points out, politicians and police think nothing of using streetlamps to track people in real-time.

Streetlamp cameras allowed Detective Carlos Muñoz to track the attacker to a 7-11, where in-store cameras and a credit card purchase helped identify him.

How could police track an alleged attacker to a 7-11 unless they have real-time access to streetlamp videos?

Instead of sending off warning bells in City Hall, the city council plans on adding more spying streetlamps. And that should disturb everyone.

The city currently has rolled out about 3,200 streetlamp cameras and expects to have about 4,200 by next summer. General Electric and government officials have promoted the system as the “world’s largest smart city platform.”

Turning San Diego into the “world’s largest smart city platform” takes on a whole new meaning when you realize that the city has at least 40,000 streetlamps.