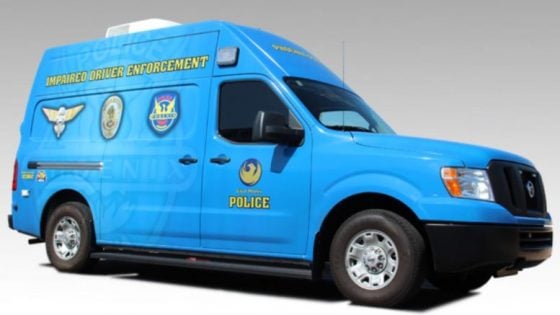 This article was originally published by MassPrivateI at Activist Post

Halloween is less than six months away but that has not stopped law enforcement from taking people’s blood. In fact, police officers want our blood so bad that they are purchasing blood draw vans … sorry, I meant DUI vans like the one pictured above.

Last year, I wrote an article about police officers forcing hospitals to draw a drunk or drugged suspect’s blood. But what I could never have imagined is that within a year, police officers would be physically drawing motorists’ blood.

A recent article in Pew Charitable Trusts revealed that police DUI vans in Arizona and California are drawing people’s blood.

A DUI police van equipped with a special chair and table for blood testing pulled up. The man refused to submit to a blood draw. So Phoenix Police Det. Kemp Layden grabbed his laptop and filled out an electronic warrant, or e-warrant, which was transmitted directly to a judge.

What makes this story so disturbing is that typically a person must be a certified phlebotomist or healthcare professional who is trained to draw blood from a patient in a safe and sanitary manner. But as you can imagine that is not what is happening. Within 10 minutes, Layden had a search warrant. Another officer drew the man’s blood. A lab report later confirmed he had active THC and a sedative in his blood.

I will eat my hat if law enforcement claims their vans and police departments are sanitary. Alleging that police officers should be treated like healthcare professionals and be allowed to physically draw blood from a person is obscene.

As the article reveals, the real reason why police officers want our blood is to “save money because they don’t need to pay phlebotomists and hospitals for blood draws.”

I cannot possibly discuss all the different things that could go wrong with police officers drawing blood, so I will only focus on two.

When a police officer calls a DUI blood van to forcibly draw a person’s blood based on a hunch that they might be on drugs or drunk, we no longer have a Bill of Rights to protect us.

As attorney John Whitehead said, forced blood draws make a mockery of the Fourth Amendment. The act of merely driving on state-owned roads should not mean that we give up our rights.

In Massachusetts, judges are starting to question so-called Drug Recognition Expert police officers who claim to have special senses that can detect if a person is impaired.

What sort of country refers to forcibly taking Americans blood as a “game-changer?”

The International Association of Police Chiefs, which is the mouthpiece of law enforcement, cannot wait for vampire cops to draw motorists’ blood.

“Together, the blood tests and e-warrants could be a game-changer in law enforcement,” said Buffalo Grove, Illinois, Police Chief Steven Casstevens, the incoming president of the International Association of Chiefs of Police.

When law enforcement has judges on-call to issue e-warrants within minutes, it is like having a fellow cop on-call authorizing the shredding of our rights.

“There’s an absolute potential for a dilution of a citizen’s constitutional protections against unreasonable search and seizure when it’s done that way,” said Donald Ramsell, a Wheaton, Illinois, DUI attorney and Illinois Association of Criminal Defense Lawyers board member. “A judge can just wake up in his bedroom and hit ‘accept’ [on his device] and go back to sleep.”

Attorney Ramsell is correct; having judge’s on-call to OK e-warrants without second-guessing a police officer’s hunch will have major civil rights implications.

If the public meekly accepts this invasive and horrific practice of allowing police to conduct forced blood draws, then forced DNA swabs cannot be far behind.

As a teenager, I watched hundreds of horror movies but I never once had nightmares that police would FORCIBLY take blood from Americans! But times have changed and it won’t be long before Hollywood makes a law enforcement reality blood draw TV show.

Here are a few names for their new show.

Instead of calling it Hawaii Five-O why not call it Hawaii Type O or call The First 48, The First Blood Draws. Last but not least, why not rename Blue Bloods the Blood Suckers?

As I said before, allowing police officers to conduct their own blood draws is a monumentally bad idea that will have major civil rights implications for everyone.

You can read more at the MassPrivateI blog, where this article first appeared.