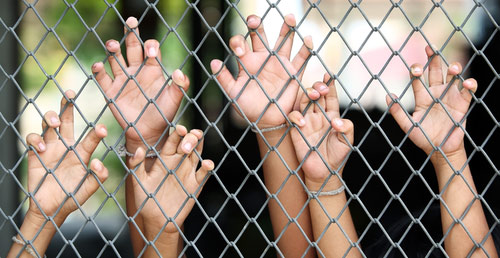 “Freedom is never more than one generation away from extinction.”
-President Ronald Reagan

If drones over America, heavily armed law enforcement agencies, and a massive government surveillance web hasn’t yet convinced you that the United States is rapidly moving towards a police state then maybe the following report out of New York will be an eye opener.

Indoctrination centers abound across the land of the free, with high schools now taking a queue from the TSA:

A New York high school is the latest in the nation to ban backpacks following several bomb threats, and has even taken extra steps, including sealing up students’ lockers.

For the last two weeks of the school year, students at Wantagh High School — located about 34 miles east of New York City — are being forced to carry their books and belongings in plastic bags, sign in and out to use the bathroom and submit to searches when entering the building. But the sealing up of lockers took school security to a new level.

Today’s pedagogic institutions are redefining what the word freedom actually means and students are falling right into line:

“It is an inconvenience, but it’s like an airport really,” Erik Beuttenmuller, an 11th-grader at the school told Fox 5 New York.

Karl Denninger of The Market Ticker weighs in:

What are we teaching our kids when we send them to prisons for 13 years out of their lives?

Yeah, bad things happen once in a while.  But the key here is “once in a while.”  They don’t happen often, statistically-speaking, and if we actually gave a damn about what was going on in these schools and excluded the abusive “kids” who are not there to learn but rather want to raise hell and abuse others we wouldn’t be having these problems.

Instead what we do is teach our kids that mass guilt is the response to one person who does an evil thing.  Rather than punish bad acts we exercise prior restraint.  We teach our kids from the first day that there are no individual consequences and rewards, only collective ones.

And the fact is that none of this actually makes anyone safer.

What it does do is condition our kids to living in a police state.

Congratulations America, because it will be you that gets shoved in the oven.