Peter Schiff: Time Is Running Out, “Crisis Worse Than 2008 Coming” 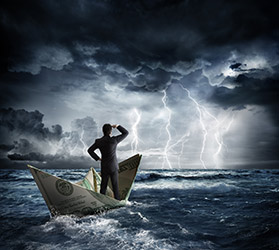 We are headed for disaster, and the only question is how long the economy can dodge a bullet.

The illusory bubble on Wall Street claims to be at record highs, but the reality, the underbelly, is dark indeed.

Economic expert Peter Schiff speaks on not only the safe haven of gold, and what is at stake in the election, but just how dire the financial consequences will be when the great storm hits and batters everyone.

As Before Its News reports:

The endgame for the U.S. economy is oblivion. 2008 was a minor correction compared to the eventual collapse of the U.S. Dollar.

WHY: After the dot.com bubble burst in 2000, Fed chairman Alan Greenspan-led the Federal Reserve through a series of interest cuts that brought down the Federal Funds rate to 1% by 2004. The bubble created by those years of cheap Fed money at 1% resulted in U.S. households losing a total wealth of almost $14 TRILLION in the 2008 crisis. Stock markets fell by almost half for losing $7.9 trillion, and the housing market lost $6 trillion.

FAST FORWARD TO TODAY: We’ve had 7 years of interest rates at 0%. As a result, there is more than just a housing bubble this time. There’s a stock bubble, a housing bubble, a bond bubble, a student loan bubble, and I could go on. As Peter explains, the Fed only has ONE option at this point: Continue to fake it for as long as possible by printing more money (otherwise known as “quantitative easing”), or let the whole system come crashing down.

HERE IS THE REALITY: The world has caught on, and the gig is up. Under Obama’s stewardship, the U.S. national debt has gone from $10 Trillion, to what will be $20 Trillion by the time he leaves office, with nothing more than 100 MILLION Americans out of work, and 50 MILLION in poverty and on food stamps. That’s what cheap money bought for us. It was all “borrowed” cheap money too, making it infinitely worse, and the world is tired of lending.

In no uncertain terms, Schiff warns that the next crisis will be far, far worse than the 2008 collapse, and the “recovery” that has since rotted away at the house:

Peter Schiff: “This Is the Match That Ignites the Powder Keg”: Gold Surges As Brexit Sparks Huge Financial Crisis