Pentagon Takes a Page from Cops, Investigates Themselves, Finds ‘No Wrongdoing’ in Drone Bombing Family 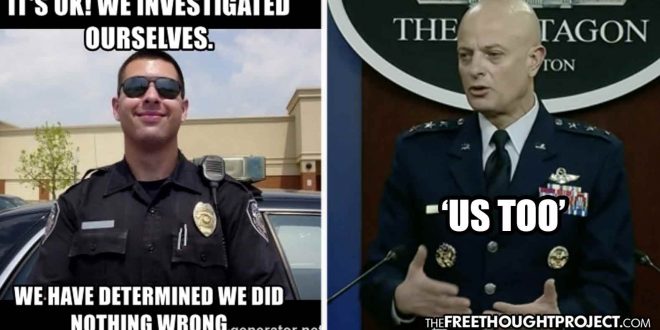 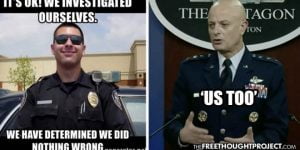 Several months ago in Afghanistan, the Ahmadi family was filled with the hope of a new beginning as the U.S. finally pulled out of the country. They were planning a wedding in a few days and life was getting back to normal. But on August 29, a Sunday, all that would change thanks to the largely incompetent and extremely deadly U.S. drone program.

Thanks to the murderous incompetence of the US war machine, a drone strike turned 10 innocent people, including 7 small children, into dust that day.

Paving the way for a cover-up, after denying it for days, and disintegrating an entire innocent family, Pentagon officials told Fox News that no disciplinary action was to be expected for the drone bombing that murdered 7 children.

The Pentagon could say this with confidence given the fact that they were the ones who were going to conduct the “investigation” into this wholesale slaughter of innocence. And now we see that they were not bluffing.

On Wednesday, the Associated Press reported that the Pentagon conducted its own “independent review” and it has “concluded that the U.S. drone strike that killed innocent Kabul civilians and children in the final days of the Afghanistan war was not caused by misconduct or negligence, and it doesn’t recommend any disciplinary action.”

In other words, “we investigated ourselves, and found nothing wrong.” This is quite literally a police meme, which the Free Thought Project has reported on extensively. The completely illogical reasoning given by Air Force Lt. Gen. Sami Said to the AP reads like a joke — except the punchline of this joke is a dead family — not funny at all.

“I found that given the information they had and the analysis that they did — I understand they reached the wrong conclusion, but … was it reasonable to conclude what they concluded based on what they had? It was not unreasonable. It just turned out to be incorrect,” Said said.

We are certain that the Ahmadi family — at least what’s left of them — heard this statement and is now content with their entire family being turned into a fine red mist that day. There is probably no ill will any longer. After all, the 7 children that were murdered that day, were only murdered because the US murder machine was acting on “incorrect” information and ‘concluded that what they had concluded was the wrong conclusion.’ Case closed.

Obviously, that is not at all what’s happening and the US drone program which has laid waste to thousands of innocent civilians over the years does nothing to fight terrorism and acts more like a recruiting tool for extremism. One very easy way to turn someone into an extremist is to blow up their child.

“According to the Inspector General, there was a mistake but no one acted wrongly, and I’m left wondering, how can that be?” Steven Kwon, president of Nutrition and Education International, which employed Ahmadi, said in a statement. “Clearly, good military intentions are not enough when the outcome is 10 precious Afghan civilian lives lost and reputations ruined.”

As TFTP reported, on that fateful day, Zemari Ahmadi, 38, pulled up to his home in a densely populated residential neighborhood as his 13-year-old son, Farzad, his youngest of three, came racing to greet him. Farzad was learning to drive and it had become a daily practice after Zemari came home from work for Farzad to get in the car and park it in the driveway.

Other family members came outside to greet Ahmadi and watch young Farzad pull the car into the driveway. But the car would never make it. As the car began moving forward, a massive explosion went off in the vehicle killing Zemari, Farzad, and the eight other family members who had gathered to watch the 13-year-old practice driving.

Survivors and those who were only slightly maimed by the explosion would soon learn that it was a U.S. taxpayer-funded missile fired from a reaper drone that had been following Zemari all day — wrongfully accusing him of being a member of ISIS-K.

Two-year-old Malika Ahmadi, and two other toddlers were the youngest family members killed, along with Ahmadi’s nephews Arwin, 7, and Benyamin, 6, and Zemari’s two other sons, Zamir, 20, and Faisal, 16.

Zemari had absolutely nothing at all to do with ISIS-K and was actually a technical engineer for Nutrition and Education International, a nonprofit working to address malnutrition based in Pasadena, California.

Before a U.S. drone pilot turned him and his family into a fine red mist, Zemari had been helping to bring meals to women and children at refugee camps in Kabul. He was an ally, not an enemy of the United States — yet he and his entire family and many others were violently wiped off the face of the Earth.

But fret not free world, the Pentagon simply made a mistake and if we are to maintain our freedom, mistakes like this one are part of the routine. After all, you have to crack a few eggs to make an omelet, right? You have to blow up a few thousand children to “protect freedom,” right? The good news is, there is very little freedom left in America for the terrorists to hate, so we should be done blowing up children for freedom any day now. Right?