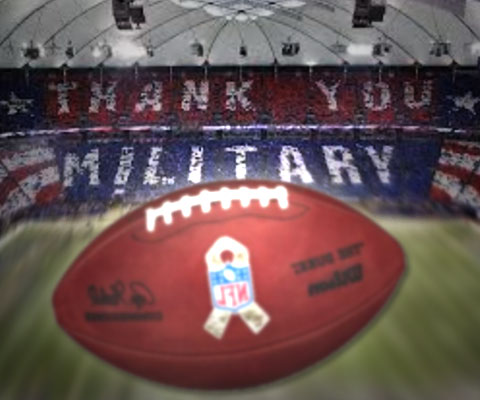 How far will the establishment go to prop up support for its many wars and make average Americans believe we are overseas fighting for ‘freedom’?

Apparently, flag waving, crowd saluting, veteran tributes and declarations of support for the troops and other nods to the military/guard that take place at the average professional sports game during half time – while crowds eat stadium dogs and drink down beers and look on gloatingly – weren’t spontaneous displays of patriotism.

Instead, they were staged managed military PR events that came with a price tag for taxpayers. Expenditures by the Pentagon and National Guard to buy sponsorship and promotional deals with numerous NFL teams, NASCAR and other sporting arenas have come under scrutiny with some members of Congress:

The Pentagon would have to justify the military necessity of spending millions on sports sponsorships under a measure approved Thursday by the Senate.

The Pentagon has given millions to professional sports leagues in recent years in exchange for “patriotic tributes.”

From 2011 to 2013, the cost of the Guard’s NASCAR sponsorships totaled $88 million. Its sponsorship of NASCAR was aimed at building “brand awareness” for the service, according to the Guard. The Guard announced last summer that it was ending its relationship with NASCAR.

USA TODAY reported last year that the Guard had spent $26.5 million to sponsor NASCAR in 2012 but failed to sign up a single new recruit.

The Guard received about 25,000 recruiting prospects from the program in 2012, with prospects indicating the NASCAR affiliation made them seek more information. But of that group of 25,000, only 20 met the Guard’s qualifications for entry into the service. Not one of them joined.

So the justification is recruitment and awareness, but the deeper effort is the public image of the military itself as an organization.

Besides being wasteful spending, it basically amounts to sleazy, pay-for-play patriotism, giving major sports franchises lucrative incentives to embed military tributes and ceremonies into the game and create a picture in the minds of viewers that of an unwavering force for good.

Senator Jeff Flake (R-AZ), for one, was kind of let down by the ruse of self-promotion:

[…] Flake wrote, “giving taxpayer funds to professional sports teams for activities that are portrayed to the public as paying homage to U.S. military personnel would seem inappropriate.

“Such promotions conjure up feelings of patriotism and pride for most sports fans, and the revelation that these are in fact paid arrangements is disappointing.”

In some cases, sports fans were misled on the source of the recognition. New Yorkers attending MetLife Stadium, for instance, were not made aware that a “hometown heroes segment” was anything but homegrown, and had instead been arranged and paid for by military campaigners.

During the 2012 and 2013 NFL seasons, for example, the New Jersey Army National Guard paid the franchise between $97,000 and $115,000 for a wide range of advertising and promotion, including a video board feature recognizing hometown heroes and 500,000 digital banner impressions inside MetLife Stadium.

Here’s the war state in full effect – the repetitive calls to salute flag and “honor veterans” – all part of a larger effort to hide decades of war and foreign policy blunders behind uncritical calls to “support the troops” – no matter what.

This topic has gained scrutiny only through the pressure of budgetary constraints, but the real offense comes from the subtle fascism displayed between mega-corporations, high profile sporting events and the military-industrial complex. Under the guise of recruitment, the Department of Defense and the National Guard paid millions of dollars for professional and college sporting teams to become part of the propaganda. The celebrity athletes beloved by crowd could lend credence to the endeavors of the military.

Meshed into this arrangement are taxpayer funds for new sports stadiums, tax breaks and exemptions for the NFL, NASCAR and other major sporting arenas and a routine housing for propaganda of all kinds. The population has been conditioned to feast at this bread and circuses, and bred to become indifferent and ignorant, and ultimately compliant with the war machine and complex larger military-entertainment empire.

And that’s just the way they’d like to keep it.