Paris Tax Revolts: The World Begins To Realize The Truth About Government 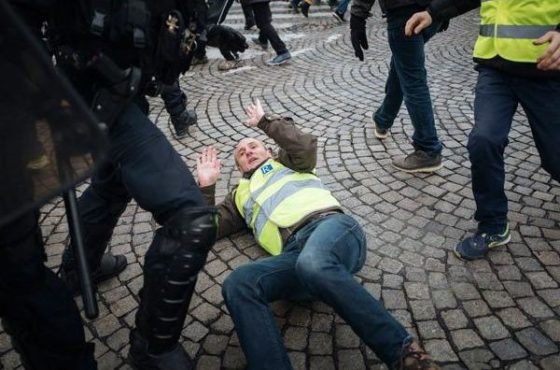 The world appears to be slowly awakening to the disaster that governments have caused and funded by theft over the course of human history. The French revolts, which began over an increase in the petrol tax, left 133 people injured and over 400 arrested after the people rose up finally realizing that all taxation is theft.

As governments across the globe increasingly enslave the tax cattle, more and more are waking up to the violence and horrific atrocities committed in the name of government with funds stolen from innocent people. Paris was only the latest example of people beginning to realize they are enslaved to the political elites and are finally demanding their freedom and refusing to be stolen from any longer.

French President Emmanuel Macron was chairing an urgent security meeting today following the violence by anti-government protesters in the streets of the French capital, according to a report by The Evening Standard. The protest against rising taxes and the high cost of living forced by government regulations turned into a riot in the French capital, as activists wearing yellow jackets torched cars, smashed windows, looted shops, and tagged the Arc de Triomphe with multi-colored graffiti. The violence is certainly unacceptable, however, people seem to be at the beginning stages of the realization that government is not a solution, and is actually a problem.

Macron has already vowed that those responsible for the violence will pay for their actions in the streets of Paris. A government spokesman, Benjamin Griveaux, said that Saturday’s violence was due to people who hijacked the protest, people who came “to loot, break and hit police forces.” When he was asked why thousands of French police could not prevent the damage, especially to the nation’s Arc de Triomphe monument, Griveaux said: “Yesterday we made a choice … to protect people before material goods.”

But the protesters say they have had enough of their own stolen funds being used to further their enslavement by the government. “It’s difficult to reach the end of the month. People work and pay a lot of taxes and we are fed up,” said Rabah Mendez, a protester who came to march peacefully in Paris.

The media also needs to take a long hard look at just how they are portraying these “riots.” This is about people finally beginning to realize that they are enslaved by the government. It sure would be nice if the media stopped painting this revolt simply as a handful of people “upset at the cost of living.” Which is still, obviously, caused by government interference in the market. The oppressed and enslaved masses are getting upset at the political masters and it needs to be stated as such.

“We are here to protest against the government because of the rise in taxes [in general], not just petrol taxes, which is the straw that broke the camel’s back. We’ve had enough. We have low salaries and pay too much tax and the combination is creating more and more poverty.” said protestor Idir Ghanes, according to the Guardian. “On the other side, there are government ministers and the president with their fabulous salaries.” All those fabulous salaries are funded by stealing the money from those who actually work.

“None are more hopelessly enslaved than those who falsely believe they are free.” -Johann Wolfgang von Goethe