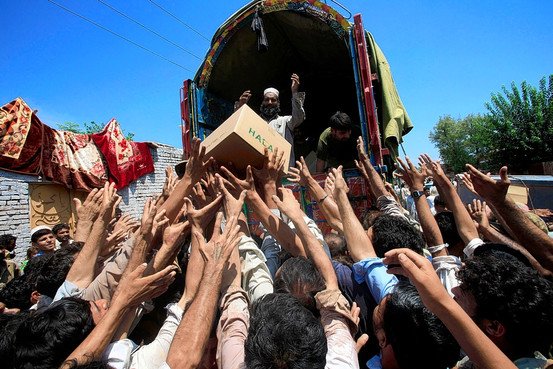 As usual, governments generally act after it hits the fan, and this time is no exception.

According to a recent report out of Islamabad, governments across the world have finally realized that the rise in essential food commodities, coupled with an ever increasing global population and decreased production related to weather and climate, may be the single most dangerous catalyst for political uprisings:

Governments in Asia, the Middle East and North Africa have recently made large food purchases on the open market in the wake of unrest in Tunisia which deposed president Zine al-Abidine Ben Ali.

Resentment at food shortages and high prices, as well as repression and corruption, drove the popular uprising which swept away his government.

Algeria purchased 800,000 tonnes of milling wheat on Wednesday and Saudi Arabia has said it will purchase enough wheat for a 12 month reserve.

Egypt, which has seen several days of unrest in part provoked by high food prices, is expected to follow.

Bangladesh has tripled its rice import target and Indonesia this week bought 820,000 tonnes of Thai rice.

Throughout history, governments have used food as a weapon – but when those governments can’t acquire the food they use to control the people, their very existence is threatened.

As trend forecaster Gerald Celente has oft repeated, when the people are broke and hungry and lose everything, and they have nothing left to lose, they lose it. This is the effect that’s sweeping the Middle East today. And, if Western governments don’t figure out a way to get prices under control, we’ll see food riots and political uprisings spread to Europe (again) and the United States.

There is, of course, an obvious problem with the panic buying we’re seeing from those governments that are worried about civil unrest. As they buy up food on the open market by the ton, they risk the unwanted, and in the case of government, the unforeseen, effect of inflating, and perhaps hyperinflating, the commodities markets.

The price increases we reported on in The Real Rate of Inflation (October 2010)Â  were primarily a result of food production shortages and monetary expansion by the United States and Europe, as billions upon trillions of Dollars and Euros flooded global stock and commodities markets. Now, with large scale government commodity purchases entering the markets, we will likely see yet another leg up in prices for essential foodstuffs like wheat, rice, oats, corn and meat.

Not to mention the fact that many of the world’s food producing nations are restricting exports in order to maintain reserves for their own populations. A report from the United Nations suggests these isolationist tendencies, along with attempts by some governments to control the free market price of commodities through price controls, has the potential to further exacerbate prices and supplies:

Richard China, director of the FAO’s [UN’s Food and Agriculture Organisation] policy and programme development support division, said, “The experience of the 2007-2008 food crisis shows that in some cases, hastily taken decisions by governments to mitigate the impact of the crisis, have actually contributed to or exacerbated the crisis and aggravated its impact on food insecurity.”

He said: “FAO strongly advises against such measures, as they often provoke more uncertainty and disruption on world markets and drive prices up further globally, while depressing prices domestically and hence curtailing incentives to produce more food.”

It’s generally the case that governments take action when it’s too late, and when they do finally decide to mitigate a problem, it only gets worse because they often make the wrong decisions.

Given the uprisings spreading through the Middle East, continued monetary expansion by Western nations aimed at preventing systemic collapse, and the bulk purchases of critical commodities by panicked governments, we can expect to see a marked increase in the price of food throughout 2011. In some areas, it may get so bad that food won’t be available for purchase at any cost, leading to widespread humanitarian crises, especially in third-world and developing countries.

We continue to recommend, as we have for the last two years, that individuals take matters into their own hands when it comes to food. Do not under any circumstance, depend on your government to provide you with your basic necessities, because there’s a real possibility that they will fail you when you need it most. Those countries that have been buying food on the open market are not doing so because of their benevolence – they are stocking up so that their primary means of control doesn’t run dry. When the time comes, those food reserves will be used as a weapon.

The best advice we can give is the same advice we’ve taken to heart: Buy food and other commodities at today’s lower prices, and consume at tomorrow’s higher prices. It’s that easy. You can pay $10 for twenty pounds of rice today, or expect to pay $20 – $25 by the end of the year. If physically stored rice were a paper stock, that would be a gain of over 100% on your investment in just 12 months – that is, if the current trend of rising food prices continues, and we believe it will. You don’t have to have tens of thousands of dollars to make sound and worthy investments. There’s an easy way for you to preserve wealth, invest and prepare for hard times, but you may need to redefine how you view the term “investment.”