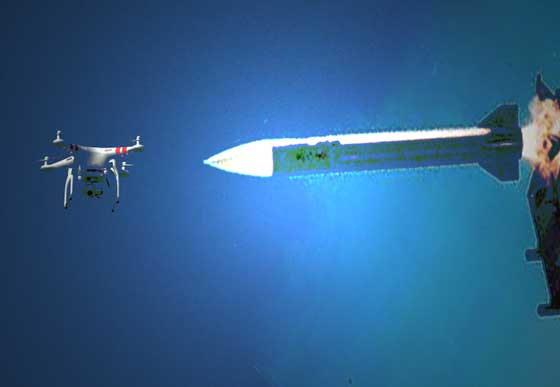 Talk about a mismatch of power, and use of excessive force.

An unnamed ‘ally of the U.S.’ apparently felt so picked on by the pesky tactics of the other side that it decided to fire off a $3 million Patriot missile to take down a small hobby-sized drone.

No details are released in this report about where the incident took place, or who was involved, because it was a story in an army presentation. However, Iraq was mentioned as an example, and mention was made that the drones were allegedly being used to deliver weapons across a threshold.

A Patriot missile – usually priced at about $3m (£2.5m) – was used to shoot down a small quadcopter drone, according to a US general.

The strike was made by a US ally, Gen David Perkins told a military symposium.

“That quadcopter that cost 200 bucks from Amazon.com did not stand a chance against a Patriot,” he said.

“Now, that worked, they got it, OK, and we love Patriot missiles,” the general said.

However, Gen Perkins suggested deploying large surface-to-air missiles as a defence was probably not economically wise.

“I’m not sure that’s a good economic exchange ratio,” he told an audience at the Association of the United States Army’s Global Force symposium in Alabama.

“In fact, if I’m the enemy, I’m thinking, ‘Hey, I’m just gonna get on eBay and buy as many of these $300 quadcopters as I can and expend all the Patriot missiles out there’.”

That’s the definition of overkill, for sure.

And it’s quite absurd.

Somewhere down the line, that was taxpayer money used to outgun the wrong target. And at home, tanks are used to SWAT raid American neighborhoods.

Here’s the video of what, if it actually happened, is a completely ridiculous military spending and scaling up of war everywhere.

Propaganda War Exposed In Aleppo: “About To Die, Saying Goodbye… But Available for Interview”