Outbreak: Borders On Lock Down as Ebola Spreads: “We Will Lose Many People” 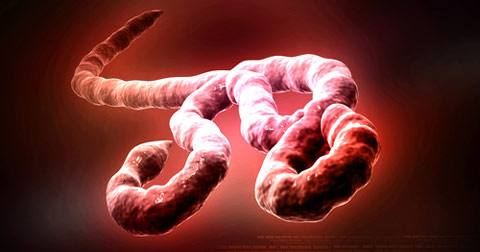 One of the world’s most terrifying viruses is multiplying. Thus far at least 70 people have died from the Ebola virus in Guinea in recent weeks and though officials have taken steps to shut down the country’s border it may already be too late. The deadly strain of hemorrhagic fever has reportedly already spread to neighboring Sierra Leone and Liberia.

The virus is normally acquired as a result of the butchering of or consumption of meat from bats or monkeys, which has prompted Guinea’s government to issue a ban on, among other things, the sale and preparation of bat soup. But because the virus can be spread from human-to-human via feces, blood, saliva, or sweat, it’s possible that the virus is now spreading through the general population.

Frighteningly, while the virus has historically be contained in rural areas of Africa, the latest outbreak has spread to Conakry, Guinea’s capital city of two million people.

As noted by Underground Medic, the strain of virus detected in those that have already died has been confirmed as the Zaire strain of Ebola, which has a fatality rate of 90%.

The disease has traveled 526 miles from Nzerekore to Conakry since Wednesday. It is a highly infectious disease and there are fears that community spread has already occurred.

With an incubation time between 4 and 21 days, and an average mean of 16 days, the amount of people an infected person has come into is considerable. Public transport is often overloaded and crowded living conditions give the disease ample opportunity to spread.

Reports indicate that the virus was largely isolated to Guinea’s low-population regions but one individual who got sick was transported to the country’s capital by his relatives. That person subsequently died, but he or those transporting him may have affected others.

Because of an incubation period that can last nearly three weeks, it may be difficult to identify those who have contracted the virus, which is one reason that officials in Africa, Europe and the United States are watching closely:

What governments and clinicians fear is a person incubating Ebola travelling through an international airport, infecting people from around the globe, before boarding their flight. With the average incubation taking 16 days tracing contacts of an infected individual would be a logistical nightmare. Many believe it would be an impossible task as airports only hold names of those booked on flights, not friends and relatives who are seeing them, and thousands of others off on their journeys.

After three decades in the health care environment I am not easily scared by bacteria and viruses. Out of all the diseases that are capable of doing us harm, Ebola scares me the most, in fact it terrifies me.

Ian Lipkin, a professor of epidemiology at Columbia University is equally concerned:

What normally happens is that international groups like Médecins Sans Frontières come in and cordon off the area, use a variety of diagnostic tests to exclude the worried well from truly sick, and try to interfere with some of these funeral practices. Then the episode dies out.

But [this outbreak] seems to have moved. It’s not as well contained as we would have hoped. I anticipate we will lose many people, but it will be a self-limited outbreak. We’ve lost less than 70 people. But it’s terrible.

The Ebola virus seems to remain isolated in Africa for the time being, but if one infected individual boards an international flight to Europe, South America, Asia or the USA then all bets are off. With cramped quarters on an airplane over a period of several hours you could potentially end up with scores of cases, and most of those infected would have no idea. From there we could have a spread of deadly contagion unlike any we’ve seen in modern times.

If even a single case pops up in the United States or Canada it could cause mass panic, and for good reason. Nine out of ten people who contract the virus would likely perish.

Those in high-risk communal areas like schools, offices, sporting events or mass transportation systems would be the most likely to acquire and then spread the virus.

The following video reveals the reach and rapidity of pandemic spread originating at a major international airport:

The models rely on the concept of ‘effective distance,’ and the belief that contagion now travels much more quickly and effectively between busy airports in different countries than between cities and more rural areas in the same country.

The maps show various routes travelling from a given airport which is the source of the contagion (in this case London Heathrow).

Circular diagrams show the radial distance from the disease source and the expected spreading path a contagion phenomenon will take – including other airports that might become gateways for the disease. (Exclusive News)