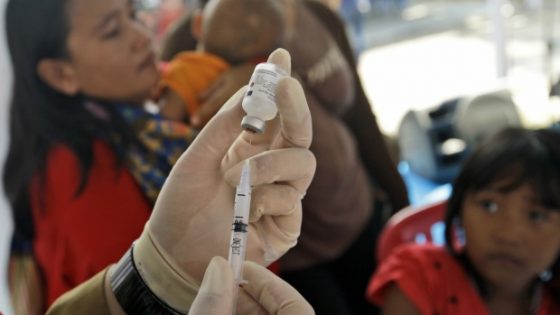 Indonesia is seeing an outbreak of diphtheria which is scaring civilians and government officials alike.  The disease continues to spread as officials desperately work to contain the bacteria before it becomes a pandemic.

The bacteria that causes diphtheria ravages the human body. It causes a thick covering in the back of the throat and it has so far, infected hundreds in Indonesia. The disease is spreading quickly and not only to regions with limited health service but also to the country’s capital Jakarta, where health services are much better.

Between January and November 2017, the government has recorded 593 diphtheria cases, spread across 95 regencies in 20 provinces. The death toll has reached 32. The World Health Organization data on diphtheria shows that the number of cases in Indonesia has fluctuated since the 1980s. –Medical Xpress

Diphtheria is a life-threatening communicable disease that spreads through air containing Corynebacterium diphtheriae, which can lead to breathing difficulties, heart failure, paralysis, and even death if left untreated. The bacteria attacks the upper respiratory system, leading to symptoms such as high fever, sore throat, difficulties in swallowing, and shortness of breath. The bacteria can also spread through spits and coughs and contaminated objects. When they enter the body, they release toxins which spread through the blood and can cause damage to the body system, especially the heart and nervous system. These complications can lead to death.

Since diphtheria is caused by a bacteria, antibiotics are normally a simple and effective treatment if administered in time. But government officials are blaming the outbreak on an “anti-vaccination” movement growing in Indonesia, prompting the mass vaccination of children.  Some eight million children and teenagers across the Southeast Asian nation will receive a vaccination in an attempt to prevent further spreading of the disease

Perhaps an even bigger issue, however, is that many diseases that were once easily treated are developing antibiotic resistance. About 75% of Indonesian children have already been vaccinated against diphtheria, but the efficacy of antibiotics to fight the disease is also decreasing at a rapid rate.

The aggressive mass-vaccination program started from Monday in three of the country’s most populous provinces, including the capital Jakarta, and could continue into next month, officials said. “Diphtheria cases have been rare for a long time in Indonesia, so people were no longer aware of the danger and did not take their children for vaccinations,” senior ministry official Jane Soepardi told Agence France-Presse.

Adding more concern to the issue is the landmark study which found that the DTP vaccine is also toxic and not entirely effective, so a high vaccination rate is not wholly helpful.

“It was not scary at all. My teacher told me we all must be vaccinated and it did not hurt either,” Ragil Setiawan, a 10-year-old student at an elementary school in Tangerang, just outside of Jakarta, said Monday after getting his shot.

However, data from the Information and Data Centre at the Health Ministry published in 2016 shows that the vaccine may not be all that effective at diphtheria prevention.  “Routine data” taken annually from 2007 to 2015 shows very high vaccine coverage data in 2013: 99.3%. With that kind of coverage, incidences of diphtheria SHOULD have been scarce – yet the outbreak persists.

According to Medical Xpress, the increasing number of cases from year to year means medical officials need to take a close look at the effectiveness of DPT (diphtheria, pertussis, tetanus) vaccines.