Orlando Killer Worked For Company Transporting Illegal Immigrants Inside US; Was Interviewed By FBI 3 Times 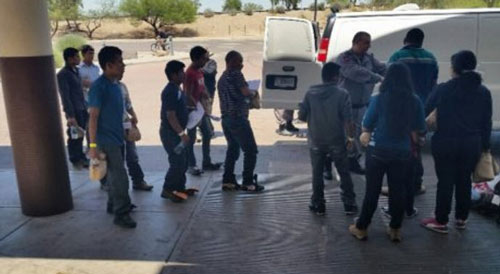 Editor’s Note: And the plot thickens as reported by Zero Hedge. Is it possible that Orlando shooter Omar Mateen helped to transport Islamic Terrorists deep into the United States via Mexican smuggling routes?

Related reading: Border Patrol Confirms Islamic Terrorists Have Been Smuggled In Through Mexico

Also read: Shooter’s Father Says This Was Not About Religion

In a surprising discovery, the Palm Beach Post first reported that according to state records, Orlando shooter Omar Mateen – who as we reported earlier was licensed as a security guard and also holds a firearms license – was employed by the US subsidiary of G4S plc, a British multinational security services company, whose US-headquarters are located in Jupiter, Fla, and which also happens to be the world’s largest security company by revenue.

Shortly thereafter, G4S confirmed that Omar Mateen has worked for the company since 2007. This is the statement released from G4S:

“We are shocked and saddened by the tragic event that occurred at the Orlando nightclub. We can confirm that Omar Mateen had been employed with G4S since September 10, 2007. We are cooperating fully with all law enforcement authorities, including the FBI, as they conduct their investigation. Our thoughts and prayers are with all of the friends, families and people affected by this unspeakable tragedy.”

In other words, Mateen who according to preliminary reports, had been on a terrorist watchlist, and who still managed to obtain weapons thanks to his various licenses and permits, was employed by one of the world’s largest security companies, where he may have had extensive clearances well above his pay grade.

But where it gets more disturbing is that as Judicial Watch reported several days ago, in a post titled, “DHS Quietly Moving, Releasing Vanloads Of Illegal Aliens Away From Border“, border patrol sources said that the Department of Homeland Security (DHS) was quietly transporting illegal immigrants from the Mexican border to Phoenix and releasing them without proper processing or issuing court appearance documents. As a reminder, the government classifies them as Other Than Mexican (OTM) and this week around 35 were transferred 116 miles north from Tucson to a Phoenix bus station where they went their separate way. Judicial Watch was present when one of the white vans carrying a group of OTMs arrived at the Phoenix Greyhound station on Buckeye Road.

And this is where the Mateen-G4S link emerges: as JW reported previously, a security company contracted by the U.S. government is driving the OTMs from the Border Patrol’s Tucson Sector where they were in custody to Phoenix, sources said. The firm is the abovementioned G4S, the world’s leading security solutions group with operations in more than 100 countries and 610,000 employees. G4S has more than 50,000 employees in the U.S. and its domestic headquarters is in Jupiter, Florida.

Judicial Watch noted that it had filed a number of public records requests to get more information involving the arrangement between G4S and the government, specifically the transport of illegal immigrants from the Mexican border to other parts of the country. The photo below shows the uniformed G4S guard that transported the OTMs this week from Tucson to Phoenix.

Outraged Border Patrol agents and supervisors on the front lines say illegal immigrants are being released in droves because there’s no room to keep them in detention. “They’re telling us to put them on a bus and let them go,” said one law enforcement official in Arizona. “Just move those bodies across the country.” Officially, DHS denies this is occurring and in fact earlier this year U.S. Customs and Border Protection Commissioner R. Gil Kerlikowske blasted Border Patrol union officials for denouncing this dangerous catch-and-release policy. Kerlikowske’s scolding came in response to the congressional testimony of Bandon Judd, chief of the National Border Patrol Council, the labor union that represents line agents. Judd told lawmakers on the House Judiciary Committee that illegal immigrants without serious criminal convictions can be released immediately and disappear into the shadows. Kerlikowske shot back, telling a separate congressional committee: “I would not stand by if the Border Patrol was — releasing people without going through all of the formalities.

Meanwhile, the Hill reported that Mateen’s employment, and gun licenses, were untouched even though the FBI confirmed it had interviewed the 29-year-old three times before the shooting took place early Sunday morning.  An official said that the FBI first became aware of the suspect, Omar Mateen, 29, in 2013 when he made “inflammatory comments to coworkers alleging possible terrorist ties.”

In the course of that investigation, Mateen was interviewed twice, but the FBI was unable to verify the substance of his comments.

The FBI said it is looking into any and all connections, both domestic and international to the shooting that killed 50 people and injured 53 at a crowded gay nightclub.

The agent at Sunday afternoon’s press briefing also confirmed reports that the shooter called 911 before the massacre, and said his remarks had general connections to the Islamic State of Iraq and Syria (ISIS) terror group. The content of those calls is now federal evidence.

It gets even more bizarre: despite his chequered history and his numerous FBI encounters, the Orlando Police just reported that he had managed to purchase firearms in just this past week.

ATF: The gunman legally purchased the firearms within the last week. In Florida.

A Bureau of Alcohol, Tobacco, Firearms and Explosives spokesperson confirmed that Mateen legally purchased 2 firearms — a handgun and a long gun, “within the past few days.”

Armed with all this information, the big question, now that it has emerged that Mateen worked for the same company that has been tasked – under questionable circumstances – to transport illegals into the US, is whether or not this individual who swore allegiance to ISIS moments before the worst mass shooting and who was also employed by G4S for almost a decade, and who had been interviewed by the FBI three times and yet still managed to buy guns just last week, was also tasked in any way in facilitating the transport of illegal immigrants across the border, and if so, whether he helped other like-minded radical islamists enter the country.

We are confident all these questions will be addressed by the Department of Homeland Security, the FBI and the government, and that the media – liberal or otherwise – will promptly follow up on these key questions.