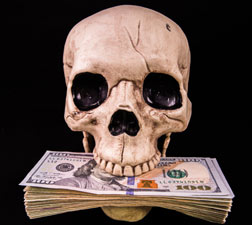 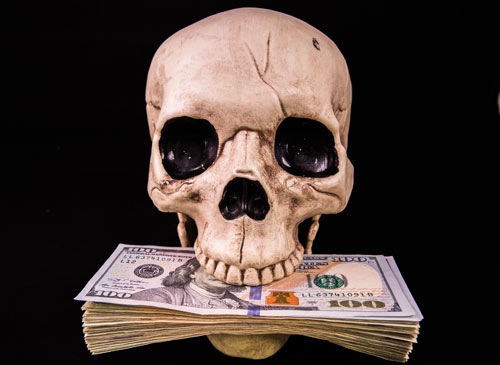 Readers, you’re awake to the horrors of the Federal Government, our rapidly-declining GDP and ever-increasing debts.  Trillions of dollars have been stolen, in the form of appropriations and programs that funnel directly from the tax-base: the fat “cash-cow” that the government suckles from.  The taxes are life-sustaining to the government juggernaut, managed by the ever self-serving “representatives” of Congress who approve pay raises for themselves, immunity from prosecution from (what was formerly) insider trading, and exonerate themselves from any and all ethics violations.

Taxes keep the government going, keep the system emplaced and you the citizen in your place, from birth to death.  The website ivn.us reports the breakdown for the federal government’s feedings:

Ben Franklin summarized the position of the average citizen two centuries ago:

“In this world nothing can be said to be certain, except death and taxes.”

Franklin was correct; however, he should have reversed the order, because taxes can both bring on death and still haunt the deceased after their passing.  The best example of this is the death tax, where a person’s estate is assessed after their death.  Their heirs better pay the tax man!  Yes, how exactly does all of that work?  The deceased individual worked all of their lives, paying income taxes both federal and state, paying off their house and mortgage, paying their property tax.

If they paid for their house in full, and all related property taxes, then why is it assessed for a death tax?

The death tax is labeled conveniently as an “inheritance tax,” much in the manner that conquest and possession of more property is done by a municipality.  Labeled aseptically as “annexation,” it is where the nabobs of the “grand council” of the municipality vote to take for themselves (sorry, the municipality) more land/territory.  It’s all within their laws, and everyone smiles and pays the additional taxes happily ever after.

This year more than $3.4 trillion in federal taxes are estimated to be taken in by the federal government.  Add to this the $1.5 trillion in local and state taxes, and this figure amounts to more than 31% of the nation’s income.  Meanwhile look at the tax dodges that the Clinton’s perform, such as the multiple-listed addresses for corporations in the state of Delaware, and the undeclared revenues for their books and speaking engagements.

On December 16, 1773, American colonists disguised as Indians destroyed 342 cases of tea stored on board 3 cargo ships of the British navy.  The price of tea included a tax of 30 pence per pound in England.  In the American colonies, that tax was only 3 pence per pound, and yet the colonists wouldn’t take it: they acted.  A far cry from today, where the citizens just accept all of it complacently and without more than an anguished bleat.

“The only difference between death and taxes is that death doesn’t get worse every time Congress meets.”

For the most part that is true, with the exception of the inheritance taxes, in which the dead person’s estate is divided up: the heirs either pay or lose the property that has already been paid for and property taxes paid year after year!  If you have a million dollars in the bank saved over 20 years, and you suddenly die, if the taxes have already been paid year after year on your income, then why do they double-dip and tax you after your death?

It is all anent control and dominion.  Government produces nothing, takes everything it can, and consumes all of it with wanton, avaricious gluttony.  The greed of government can never be overstated.  There are only politicians, no leaders, and those who misrepresent themselves and the Constitution in order to manipulate us and claim to represent us. They only represent themselves.  The fiat currency and the Petrodollar are already leveraged to the hilt with a negative balance after the phony, inflated, CBO-doctored GDP.

We have no leaders, only rulers.  The communist truism is correct: all authority comes from the barrel of a gun.  Taxes are a means with which to destroy wealth and property passed from one generation to the next, and control the masses, subjugating them and dominating them via the color of law that make them always answerable to a superficially-benevolent but in reality malevolent government.  All governments are vampires, and the blood they drain from the people is the blood of their taxes.  We have taxation with misrepresentation, while these miscreants continue to wine, dine, and fete themselves on their trips to Martha’s Vineyard and Cozumel.  On death and taxes, only the former allows you to escape the latter, and not even then.