Obamus Caesar: “No Limits On the Power of the President if He Calls for a National Catastrophe”

“President Obama is prepared to take power and begin to rule from day one.”
-Valerie Jarrett, Senior Advisor to the President of the United States 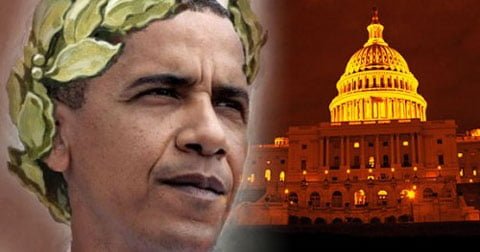 Should Congress and the President fail to come to an agreement on America’s debt ceiling we could well be facing a situation that leads Barack Obama to implement a last ditch strategy that would be nothing short of a complete takeover of the United States.

So says former US Treasury Undersecretary Paul Craig Roberts, who knows a thing or two about finance, debt and the inner workings of our government :

If the United States were to default, it would be the end of the US as a superpower.  No one in Washington wants to lose that kind of power, so I fully expect that at the last minute a deal will be reached.  Now, in the event that both sides play a game of ‘chicken’ to the very end, and we are down to the last hours, and fears of a default escalate dramatically, I think one of two things will happen….

The first would be the Federal Reserve, on its own initiative, would simply lend the US Treasury whatever money it would need.  You have to remember that the Federal Reserve lent to US and European banks more than $16 trillion in order to enable them to avoid default, or outright failure.

The second possibility would be that President Obama, because of laws that are already on the books, would have the power to declare a ‘national catastrophe’ and simply assume the leadership of the government.  This gets Congress and the courts out of the picture.  At that point there are no limits on the power of the President if he calls for a ‘national catastrophe.’

This would mean that the President, on his own authority, could raise the debt ceiling.  So, either of those two events would happen if it looked like no deal was forthcoming from the Congress.  It could be that President Obama, or others in the Executive Branch, are planning to use this crisis to invoke that Executive Order.

Of course.  It means that essentially the President would become a ‘Caesar.’  That would also mean that the Congress had become like the Roman Senate, which lost its power and simply became a collection of notable figureheads.  Generally when democratically regimes fail you end up with a Caesar, and a shutdown is of course the epitome of a democratic failure.

So this would give President Obama all of the justification for exercising the Executive Order so that the President can rule independently of Congress and the courts.

The important thing to understand is that President Barack Obama relishes the power. This is evidenced by his desperate need to monitor and command drone strikes from the White House himself. He likes the thrill of being the decision maker and holding the lives of others in his hands.

He has already passed scores of executive orders, including restrictions on firearms accessories and ammunition, as well as provisions that would allow the U.S. government to take over all domestic resources, including the labor force, should a national catastrophe be declared.

And they will let no crisis go to waste. For them, the debt ceiling negotiations reaching  a stalemate may well be the outcome they are looking for, because it will justify the administration’s invocation of Executive Order and rule by decree.

The debt ceiling debate will likely have a resolution, just as it has twice in as many years under the Obama administration, but if it doesn’t you can fully expect the Executive Branch to take whatever action they deem necessary to “protect” the American people.

If that means declaring a “national catastrophe” then that’s what they will do.