Obama’s Wars Are a Desperate Attempt to Save the Dollar: “Global Hegemony Under Attack” 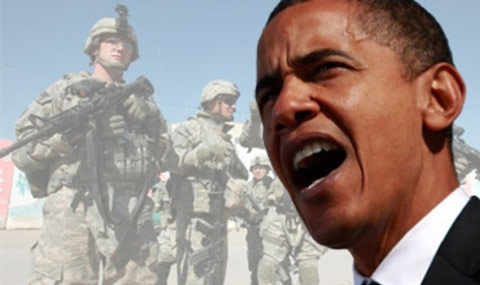 Why are Americans today in so much peril? It all boils down to currency, and specifically role of the U.S. dollar as the global reserve currency. Up until this point, the world’s oil has been traded for dollars, and petrodollars, in turn, rule the world.

But the control is ultimately in the hands of private bankers who operate the Federal Reserve and other banking institutions. Every dollar issued is a debt of equal value, owed by the American people, who are in bondage to this form of currency. The country is drowning in debt while the dollar is in its final days. Millions face economic disaster.

How much longer until the whole system comes crashing down?

Elijah Johnson interviews Mike Rivero, of WhatReallyHappened.com about the unhinging of the U.S. dollar and the rise of global currency competition.

Rivero gives an excellent summation of how we got to this point – where the American empire is based upon the U.S. dollar reserve status and perpetual warfare, in order to satiate the international bankers. It is perhaps essential viewing.

You can watch part 1 of the interview, Insiders in Gov’t “Lie, Cheat & Kill” for Power & Wealth at this link.

Here is a partial transcript of Rivero’s revealing hidden history:

“The U.S. economy is in serious, serious trouble. And that is really the ultimate root of all the warmongering that is going on.

The fact of the matter is that when you have a nation that is enslaved to a private central bank through the public currency. It is a system that is naturally unstable and eventually crashes no matter what they do.

And this nation was started with a public currency managed as a public utility. The government created the money, spent it into circulation, it flowed through commerce without accruing any interest and was taxed back in the same amount to balance the books and close the cycle. And that is what made the very young America such an economic powerhouse.

But of course, the private central bankers are adamantly globally opposed to any nation providing its own money and insists that all public currency be loaned into circulation at interest on their printing presses and on their computers. And 100 years a corrupt Congress and corrupt president sold America back into the slavery of the exact same predatory banking system we fought the revolution to break free of. And it has been continuing up to this point. By design this system produces more debt than money with which to pay the debt until the debt overwhelms the system. And that’s where we are right now.

Compounding that is the fact that the U.S. has turned away from its manufacturing prowess. Manufacturing has been declining over the last 30 years, both in quality and in quantity, and because of the disastrous experiment with genetically modified organisms, most countries around the world no longer want to buy our agricultural produce. And the U.S. is desperately trying to reverse that with conditions that are in the Trans-Atlantic Trade Investment Partnership (TTIP) and the Trans-Pacific Partnership (TPP), but whether they’re going to get these ratified or not remains to be seen.

So, going back to the end of World War II, you need to understand that before World War II, the British pound sterling was the global trade and banking currency. Because back then, when accounts where still being settled with boxes of paper notes, if not outright bullion, having a single global recognized currency did actually make sense.

Now these days, in the age of instantaneous global financial transactions, a single global currency is an obsolete idea. But Roosevelt’s price to Winston Churchill to bring the United States into the war against Nazi Germany through the backdoor of Japan was that the British pound sterling would surrender its role as the global currency and allow the U.S. dollar to take over. So as World War II was winding down, all of the major financial powers on Earth met at this luxury resort in New Hampshire called Bretton Woods, and they hammered out the Bretton Woods agreement that made the U.S. dollar the recognized global currency for cross border trading and banking, off of which the United States makes a profit because they notes are loaned out for commerce or very favorable trade deals where these other countries are bringing us manufactured goods and agricultural produce in exchange for stacks of ink and paper. And it was a very sweet deal. And it was part of the reason the U.S. was so prosperous in the post-war years, along with the fact that we still had our manufacturing base and Europe had lost most of theirs.

But as we got lazy on all this money pouring in, Wall Street decided they didn’t need to bother manufacturing anything and it was offshored or simply abandoned to the point where now Wall Street and Washington D.C. are dependent on maintaining Bretton Woods and its offspring the petro dollar. This requirement that all the resource-rich areas would trade those resources only for the U.S. dollar. And that’s a rule that is enforced with U.S. weapons of war.

A good example would be 2002. Saddam Hussein got permission from the United Nations to sell Iraq’s oil for the Euro. Tony Blair and George Bush met in Crawford, Texas and planned the Iraq War, which happened one year later. Go on in, lynch Saddam Hussein, put Iraq’s oil on the world market, only for the U.S. dollar.

Same thing happened over in Libya. Everything was fine. Gaddafi was building up the place; very high standard of living. Then Gaddafi kicks out their private central bank; he sets up a state central bank in a value-based currency, the gold Dinar, and then declares that Libya’s oil is for sale on the world market, but only for the gold Dinar. So the U.S. goes into Libya, makes a total mess of the place, kills Gaddafi. The gold for the gold Dinar has vanished. Nobody knows who got that, and Libya’s oil is back for sale on the world market only for the U.S. dollar.

And it is this attempt to drag the world back to U.S. dollar hegemony that is underlying all these wars of aggression. And because the Russian ruble and the Chinese yuan are now seen by most countries as more attractive than the U.S. dollar, that’s why the U.S. is trying to pick fights with China and Russia. This is literally a war between our paper currency and their paper currency. And for that war, the money junkies are willing to sacrifice millions and millions and millions of other people’s children.”

There’s a lot there, but it all boils down to a few basic elements, starting with the issuance of currency controlled by a private entity independent of government.

The United States is rotting. Economically, its people have been brought down a few pegs, and the middle class has been destroyed, and times ahead look ominous. Politically, the power has shifted to the few operating behind the curtain, and the votes and protests of the people are ineffective. Socially, the masses have been dumbed-down and turned against each other. Corruption and deception are metered out by a media narrative to keep everyone in line for as long as possible and the song and dance goes on, even as most end up worse off with each new cycle.

But the game is changing on the global scene. Backing and investments have shifted from West to East to new powers.

Now, there are tectonic shifts in world order, and the U.S. dollar is dying. Despite the enormous consequences this will have for the prosperity (or lack thereof) of every American, the people are being told very little about what is happening. Instead, the wars wage on with absurd pretexts in order to desperately attempt to keep the game going just a bit longer.

After that, all hell will break loose, because the stock market investors and pensioners and yuppies and sycophants and welfare dependents, along with all the average workers will be faced with the raw and degrading fact that their entire life has been built on an illusion. None of the structures and institutions which govern and employ us have been sound or solvent.

Already, presidents, politicians and agency heads have been leaving their successors and partners holding the bag on a scandalous chain reaction of crises and mismanagement meltdowns which are passed on from generation to generation. The system is based around the fascist idea of privatizing profits and dumping the losses on the public taxpayers. The system is designed to collapse, but until then, to be looted from.

Rivero notes how badly history has been kept hidden from the population, who are thoroughly indoctrinated and made to believe lies about world affairs.

“Americans are the most lied to people on the face of the earth. It’s time to fire the liars,” Rivero concludes.