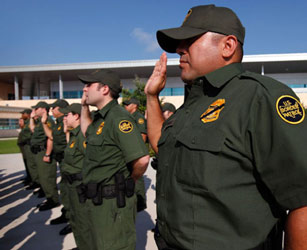 The days of civil unrest seem to be closing in. Will the system collapse on its own weight?

We’ve seen the strain that unrestricted mass migration has put on the whole of Europe. It is nothing short of cultural shock and awe.

Now.. it’s coming soon to a town near you, as U.S. Customs and Border Patrol agents report they have been ordered to outright release immigrants they may have taken into custody. It’s all part of Obama’s plan.

In a shocking reversal of policy, U.S. Customs and Border Protection agents are being told to release illegal immigrants and no longer order them to appear at deportation hearings, essentially a license to stay in the United States, a key agent testified Thursday.

What’s more, the stand down order includes a requirement that the whereabouts of illegals released are not to be tracked.

“We might as well abolish our immigration laws altogether,”suggested agent Brandon Judd, president of the National Border Patrol Council.

The whole system is being neutralized. Rather than fix the structural issues with the handling of these people, it is simply being dismantled for political reasons.

The biggest change: Undocumented immigrants are no longer given a “notice to appear” order, because they simply ignore them. Judd said that border agents jokingly refer to the NTAs as “notices to disappear.”

Judd said the the new policy “makes mandatory the release, without an NTA, of any person arrested by the Border Patrol for being in the country illegally, as long as they do not have a previous felony arrest conviction and as long as they claim to have been continuously in the United States since January of 2014. The operative word in this policy is ‘claim.’ The policy does not require the person to prove they have been here … it simply requires them to claim…”

“Not only do we release these individuals that by law are subject to removal proceedings, we do it without any means of tracking their whereabouts.

Border Patrol have been notoriously unable or unwilling to track those in their system, and the systematic failures have been considered a political embarrassment. Most illegals never show up for their deportation hearings, instead, they move and reintegrate into a different neighborhood or town.

Already, there are reports of new waves of border crossings – emboldened by the clear signals from Obama that the rules have changed.

The go free policy, he said, has prompted thousands of Latinos to cross the border, and among them are hundreds of criminal foot soldiers,

The barbarians are at the gate of a crumbling America. Though most are decent and hard working people, their pressure fissures the cracks in the foundation of a weak economy and a more difficult job landscape.

Those who have been questing for a world without borders can rejoice at the destruction of the lynch pin of sovereignty inside the United States.

Barack Obama has completely upended immigration law and forever changed the landscape of America. First he abused an executive order to grant amnesty through policy that applied to most illegals.

President Obama is destroying the Constitutional system to create a “one world” global policy, that in turn allows banker oligarchs to use immigration as an economic weapon.

They aim to “level” American workers/wages with those of the rest of the world. Rather than the developing world being built up, Western populations must have their living standards brought down to parity.

How does Obama have the authority to do that? And is there any salvaging national sovereignty?