Obama Seeks US Ban of Assault Weapons For Benefit of Mexico 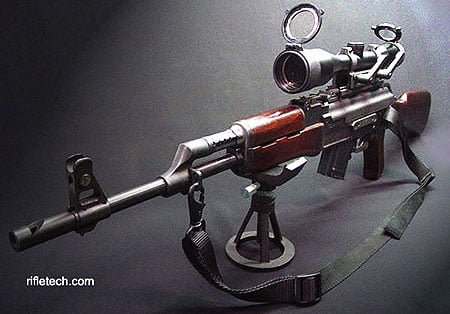 President Obama and Attorney General Eric Holder are seeking to reinstate the weapons ban on assault rifles which expired in 2004. This would ban 19 types of semi-automatic military style guns and ammunition clips containing more than 10 rounds.

According to Eric Holder, the ban is not so much focused on preventing crime in the USA as it is to help out Mexico:

“As President Obama indicated during the campaign, there are just a few gun-related changes that we would like to make, and among them would be to reinstitute the ban on the sale of assault weapons,” Holder told reporters.

Holder said that putting the ban back in place would not only be a positive move by the United States, it would help cut down on the flow of guns going across the border into Mexico, which is struggling with heavy violence among drug cartels along the border.

“I think that will have a positive impact in Mexico, at a minimum.”

What Mr. Holder is saying is that the need for lowering drug crime in Mexico supersedes the Constitutional protections of American citizens.

Perhaps Mr. Holder doesn’t understand how drug cartels operate or, more likely, does understand quite clearly and is using this as an excuse to further restrict second amendment freedoms.

If billion-dollar Mexican drug operations cannot source their weapons from the United States they would have no problems acquiring modern weapons through other means from countries like Venezuela, China and Russia.

Instead of focusing on restricting the freedoms of American citizens, Eric Holder and President Obama should focus on restricting the movement of guns, drugs and illegal aliens across our southern border. But that would be too easy, right?

If you’re a gun enthusiast, perhaps it’s time you stock up on some additional high-capacity magazines and pick up that assault rifle you’ve always wanted, just in case.